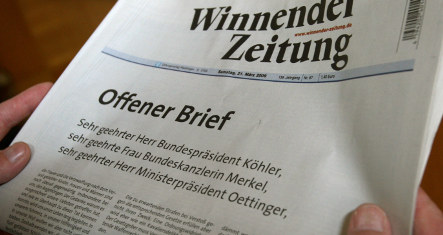 The families said, “We want to see something change in this society, and we want to contribute, so that a second Winnenden will not be possible.”

They called for access to weapons to be limited for young people, saying that the current legal situation which allows children from the age of 14 to learn how to shoot large-calibre guns, had to be changed.

“When one thinks that a young person in exactly this time of puberty, is busy with themselves, and often immature, an increase of the age limit to 21 is imperative,” they wrote.

They also questioned whether it was necessary for sports shooters to have large-calibre weapons at all. They said that until the 1980s, these were not available, and pointed out that the Olympic shooting competitions only use air- and small-calibre guns.

Should large-calibre guns continue to be allowed, the parents called for them to be physically restricted to shoot only twice at a time, as is the case with automatic weapons used for hunting.

They also called for far less violence on the television, particularly during times when children are watching. “If we continue to allow for our fellow citizens to be served a daily menu of murder and death, it can be expected that the reality will slowly, but continually, follow the media example,” they wrote. They even called for channels to have a ‘violence quota’ to limit the number of programmes containing violence.

“We want killer games banned,” they continued. “Games, whether on the internet or PC, which have the aim of killing as many people as possible, should be banned.”

The parents also called for better protection of young people when they are online, where they say they can anonymously stir each other up and provoke further violence. They admitted not knowing how this might be feasible.

The reporting of such attacks should also be dramatically altered, they said, calling for the media to be banned from using images or names of those responsible, in an attempt to reduce the chances of copy-cats. “The current example of Winnenden shows that the current reporting by the media is not suitable to prevent future violent attacks.”

While not pointing to anyone in particular, they also say that the investigation into what went wrong must also include taking personal responsibility, and the legal consequences that follow.

Police began investigating Kretchmer’s father last week for possible offences against gun laws for allegedly leaving a large-calibre weapon pistol unlocked in his bedroom – the same gun which his son used in the massacre.