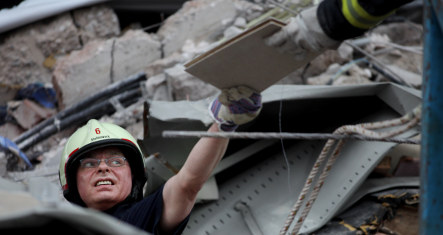 An underground ‘hydraulic ground break’, allowing water to flood into the foundations, occurred last September, according to a report in the city’s daily newspaper Kölner Stadtanzeiger on Saturday.

Those investigating how the building packed with unique cultural treasures collapsed, killing two people, heard on Friday night that the ground underneath the building had started letting water into the foundations last September – and the building was shown to be subsiding in February.

Cologne Mayor Fritz Schramma reacted to the report on Saturday saying he was ordering an investigation to find all those who knew something about it but did alert the proper authorities.

When the decision to build the four-kilometre north-south metro line was made in 2002, around 3,000 measurements were taken along the route before work began so that engineers could make regular comparisons to monitor the effects of the excavation.

On February 3, the paper said that a city official realised that despite repeated requests, the company contracted to take these comparison measurements on the archive had not delivered them.

Two days later he took some measurements himself. The day before he did so, the contractor took measurements too – enabling engineers to see that in the 24 hours between the two checks, the building had sunk by seven millimetres.

This data was available to those working on the project from February 3, the paper said, and were included in the minutes of site meetings later in February and in early March.

A meeting in February involving all those concerned with building and monitoring the metro tunnel, heard that a lot of water had flooded through the holding wall into the foundations the previous September, but that no further erosion had taken place. A delay of at least a month on building work was to be expected.

This information has been known to Bernd Streitberger, head of the city’s building department, since March 12, the paper said, adding that this opens questions of how long information was known by other key players in the construction, and how long they have withheld this from the public.

Some calls have already been made for those in charge to resign their posts.