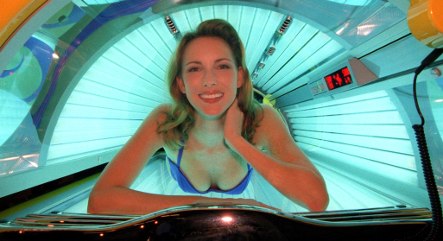 The draft law, presented last week by Social Democratic (SPD) Environment Minister Sigmar Gabriel, is meant to protect those under 18 from risk of skin cancer. Tanning studios caught catering to underage customers would face fines of €50,000.

But the SPD’s conservative coalition partner said during a parliamentary debate on Friday that instead of a ban, the government should require tanning salons to be certified to ensure they are managed responsibly.

“We don’t need impulsive action,” CDU parliamentarian Jens Koeppen said, adding that it could lead to forbidding youths from tanning at beaches or parks. “A ban would push the young people into the hands of tanning salons that operate coin-slot machines. Then they will really harm themselves if they’re allowed to enter unhindered for €5.”

The tanning bed ban was initially a component of the failed “environmental rulebook.” The long-planned framework of regulations, which also included provisions to protect land and waterways in addition to rules on radiation and tanning salons, was torpedoed by MPs in early 2009. Gabriel was a strong supporter of the rulebook and blamed the CDU and its Bavarian allies for letting it fail.

Last week, Gabriel said the tanning bed ban needed to be rushed through parliament because of skyrocketing skin cancer statistics, calling on the conservatives to “behave constructively” and “place no more stones in the path.” New statistics show that one in 10 Germans will be diagnosed with skin cancer in their lifetime.

Germany has some 5,000 tanning salons, according to Federal Office for Radiation Protection (BfS). Of an estimated 14 million tanning salon customers, some 3 million – or 21 percent – are between 10 and 17-years-old.

“Among children and young people it’s becoming more popular to go to the tanning salon,” BfS spokesperson Florian Emrich told The Local on Friday. “But their skin is extremely sensitive and there is a long-term risk.”

In 2003, the BfS began a voluntary certification programme, similar to that suggested by the CDU, for tanning salons to prove a high standard of safety regulated by experts and doctors, Emrich said. To earn a certificate, salons agreed not to allow underage customers, in addition to other practices meant to avoid health risks.

But so far only about 800 tanning salons have earned the certificate, and many of these are not fulfilling the criteria, a 2007 BfS survey found.