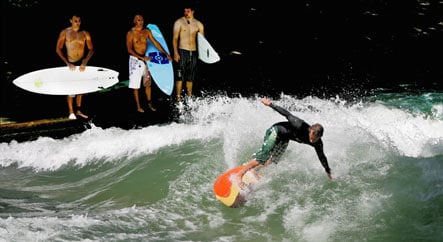 Attracting scores of surfers and thousands of fascinated onlookers each day, the Eisbach (Ice Creek) wave inside the Englischer Garten public park has become an established surf spot in the landlocked Bavarian city.

Riding on the Isar River tributary wave is technically forbidden, but dedicated surfers still take to it every day as both the city and the park, which is owned by the state of Bavaria, tolerate their fun.

“It’s good for their image,” Petra Offermann, founder of an online petition to protect the wave and unofficial spokesperson for the city’s some 1,000 surfers, told The Local this week. “No one has ever died in a surfing accident there and injuries are just normal sporting injuries like you’d get skiing or snowboarding.”

But the danger of hidden rocks just below the surface is a liability headache that neither the Englischer Garten management nor the state of Bavaria want – thus the large “Forbidden – mortal danger” sign posted next to the swell under the Prinzregentenstrasse bridge.

In the last few years, local media has also reported rumours that city officials were planning to flatten the wave after several people drowned in the Eisbach – though none of the deaths were surfing related.

“Naming the number of accidents would be far too explosive,” park director Thomas Köster told The Local, refusing to comment further on the issue.

But now there may be a light at the end of the tube for everyone.

Bavarian Finance Minister Georg Fahrenschon sent Munich Mayor Christian Ude a written proposal this month that offers to sell the patch of land that contains the wave to the city, which would have more legal rights to properly regulate its use.

“As far as I know the mayor has received it favourably, but right now there is no appointment for meetings,” Finance Ministry spokesperson Judith Steiner told The Local on Thursday. “We await their response.”

The swath of river would likely be sold to the city for a symbolic sum – reportedly as low as €1 – as a sign of good will, because all sides want to see the beloved cultural phenomenon continue to flourish, Steiner said.

“We see this as a really positive step,” surfer spokesperson Offermann told The Local. “The whole city supports saving the wave – we’ve had leaders from most of the political parties sign our online petition – and this would be a simple solution to the complicated liability questions.”

A Munich city official told The Local that there was no official news on the offer, but that the issue had been “discussed often” and the city hoped to find a solution soon.

Perhaps the surfers will even get the green light in time for the spring snow runoff from the nearby Alps.

“It would be really great for us,” Offermann said. “Things are just getting good for spring.”