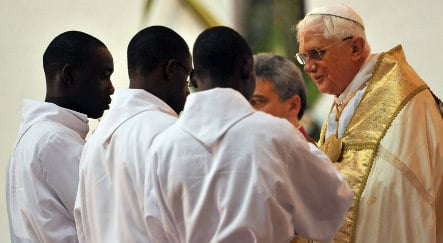 Writing in the weekly newspaper Die Zeit, Auxiliary Bishop Hans-Jochen Jaschke said “condoms can protect” against AIDS and called for an unprejudiced discussion on the issue.

“Those who have AIDS and who are sexually active and seek out new sexual partners must protect others, as well as themselves,” Jaschke wrote.

His comments come days after the pope caused a stir during his trip to Africa by reiterating the Vatican’s opposition to birth control and arguing condoms actually made Africa’s AIDS problem worse. Politicians and AIDS activists around the globe criticised the Bavarian pontiff for his stance.

“Condoms save lives not only in Europe but on other continents,” said German Health Minister Ulla Schmidt on Wednesday.

But Jaschke said that it wasn’t the Catholic Church’s intention to bully its followers with its “gloomy” anti-condom rhetoric. “Protection is called for” among married couples in which one of the partners has AIDS. Yet he too maintained that condoms alone can’t solve Africa’s AIDS problem, citing poor hygiene and living conditions, as well as lack of knowledge, as other causes.

Africa is home to 67 percent of the world’s AIDS cases and 17 million people there have already died from the disease.