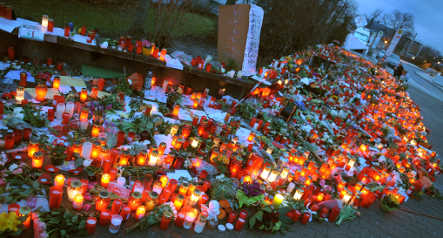 The 41-year-old driver Igor Wolf told the magazine that 17-year-old Tim Kretschmer took him hostage at gunpoint last Wednesday while he was waiting for his wife outside a psychiatric clinic in his car.

Kretschmer had already been to his old school in the picturesque town near Stuttgart armed with a handgun taken from his father’s bedroom. He’d shot and killed nine students and three teachers there, but clearly didn’t know the exact body count, Wolf told Stern.

“I’ve already killed 15 people in my old school and that wasn’t it for today,” Wolf said the young man told him while reloading his weapon and pointing at the driver during the ride. “He’s preparing for the next shoot-out, I thought,” Wolf said, adding that later Kretschmer said he might try to find another school.

Wolf told the magazine that he tried to placate and distract Kretschmer by changing the subject. When he asked his captor why he was doing “such shit,” Kretschmer replied: “For fun, because it’s fun.”

Kretschmer went on to kill three more men – one outside the psychiatric clinic where he had been due for treatment, and two others at a car dealership. Wolf was able to escape by driving his car onto a grassy area and fleeing the vehicle. Kretschmer also fled on foot but ended up shooting himself during a firefight with police some 30 kilometres from the school.

The state of Baden-Württemberg asked people in the parliament, schools and public places to take a minute of silence for the victims of the shooting on Wednesday at 10 am. The German parliament the Bundestag also took part in honouring the 15 victims at the same time.

The city of Winnenden plans to hold a main memorial for ten of thousands of people on Saturday.

“We are making every effort to be good hosts to those who want to express their sympathy,” the Winnenden Mayor Bernhard Fritz said. Chancellor Angela Merkel is also expected at a private church service for the families and schoolmates of the victims on Saturday.