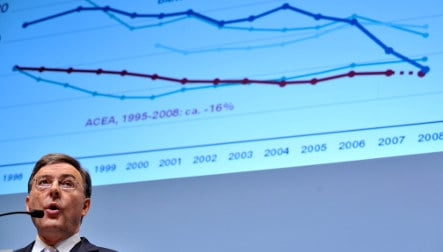 “2009 will be a year of transition, for which no reliable forecast is possible at present,” BMW boss Norbert Reithofer told the group’s annual press conference in southern Munich.

BMW expected sales for the automobile sector as a whole to fall between 10-20 percent this year but forecast that markets would pick up again in 2010.

In the meantime, “we will tighten our belts,” said Reithofer, a decision that has already led to the elimination of 7,500 jobs at the company and meant a substantial 2008 pay cut for himself and others.

Reithofer took a pay cut of more than one-third as a result.

“The sharp drop in 2008 earnings has financial consequences: a member of the BMW board must renounce around 40 percent of his annual salary,” he told media.

According to the group’s annual report, Reithofer’s pay fell by 39.5 percent to €2.3 million.

Executive pay is a controversial issue in Germany, and draft legislation that would tighten the framework on salaries was approved by the government last week.

Workers would also see their salaries cut however, with those covered by a collective wage agreement reduced by 10 percent.

Meanwhile, German rival Daimler has also declined to give a detailed outlook for 2009, saying only that sales would fall from the level posted last year.

Profits at both automakers plummeted in 2008, especially in the last quarter after US investment bank Lehman Brothers went bankrupt, plunging financial markets into fresh turmoil.

BMW nonetheless reiterated 2012 profit targets that were first outlined in late 2007 as part of a group strategy dubbed “Number One.”

The plan’s main goal is a return on sales of between eight to 10 percent, but the BMW boss said Wednesday he now expected the unit sales target of 1.8 million vehicles set “before the crisis” to be at least 100,000 cars fewer.

He stressed that it was very hard at present to give firm forecasts.

In afternoon Frankfurt trading, BMW shares fell by 2.43 percent to €22.29 while the DAX index of German blue-chips was essentially unchanged overall.

To meet its return on sales goal, BMW planned to exceed an initial reduction of €4 billion in material costs, part of a wide-ranging cost-cutting target of €6 billion.

Cutbacks on personnel costs are expected to generate up to €500 million in savings each year from 2009.

Reithofer said he wanted to “preserve the BMW group’s independence,” nipping rumours of a tie-up with either Daimler or the French group PSA Peugeot Citroen in the bud.

But BMW and Daimler cooperate already in the purchase of materials and parts, and “we will extend this cooperation and progressively buy more and more parts and components together,” Reithofer said.