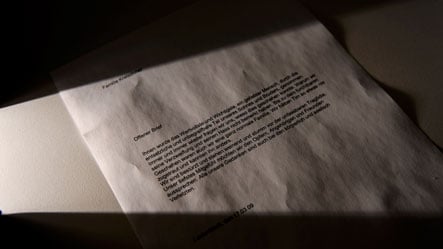 “The appalling and incomprehensible act of our son and brother took away from you the most valuable and most important thing of all, a loved one,” Tim Kretschmer’s family said in the open letter.

“We will always ask ourselves, again and again, how this could happen. How can we not have noticed his distress and his hate? Until this happened we too were a completely normal family. We never thought Tim was capable of something like this.”

They added: “We are devastated, and this unfathomable tragedy leaves us in tears and lost for words. Our deepest sympathies go out to the victims, their families and their friends. All our thoughts are also with those with physical and mental wounds.”

The teenager went on the rampage last Wednesday at his old school in the picturesque Winnenden near Stuttgart armed with a handgun taken from his father’s bedroom. He shot dead nine pupils and three teachers.

He then killed a passer-by outside a psychiatric clinic where he had been due to receive treatment, hijacked a car and shot two others at a car dealership. Kretschmer died in a shootout with police around 30 kilometres (20 miles) from the school. Police believe he shot himself.