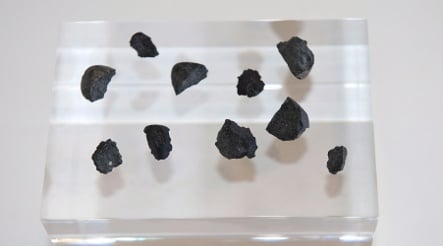 “There was a 10 percent chance that it would fall on land,” researcher Thomas Grau, who found the rocks on the Danish island of Lolland, told the paper. “I spoke with witnesses, assessed videos and photos and was able to roughly determine the location of impact.”

The 36-year-old Bernau resident located the pungent bits after six days of methodically combing a large field for the remnants of the refrigerator-size rock that blazed through the northern German sky on January 17 at 8:09 pm.

Treasure hunters and collectors have been out searching for the meteorite since that night when thousands of Germans reported seeing the flaming object. Many called police to report UFO’s – but Grau’s discovery was less dramatic. “Suddenly I saw a small black stone and picked it up,” he told the paper. “First I thought, ‘Nothing again,’ but on second glance I was sure, ‘I have it!’”

Scientists at the University of Copenhagen’s Geology Institute confirmed the meteorite’s authenticity, and Grau was paid an undisclosed finder’s fee for the pieces that add up to the size of a tennis ball and weigh in at 30 grammes. Some collectors have paid €75,000 for meteorites in the past.

“The special part ist hat the stone contains organic substances like water and methane, out of which life can evolve,” Grau told the paper.