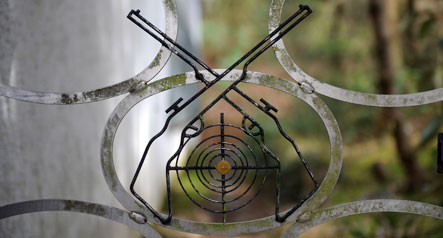 Tim Kretschmer’s father kept a dozen weapons at his home and his son is thought to have found the nine-millimetre pistol he used in the massacre in the town of Winnenden outside Stuttgart in his parent’s bedroom.

The 17-year-old also apparently knew the code to the weapons safe where his father kept thousands of rounds of ammunition.

“There are concrete indications that the parents were aware of their son’s health problems,” prosecutors said in a statement, referring to reports Kretschmer suffered from depression.

The teenage gunman responsible for the bloodbath at a school in southwestern Germany did not train regularly at the club – but he reportedly took target practice there just a few weeks before the massacre.

“The boy shot his father’s nine millimetre in his presence only once in October 2008 on the pistol range,” Lindacher said.

However, the paper reported there were credible witnesses who saw the 17-year-old shooting a large-calibre weapon at the range only three weeks before he would kill 15 people in the state of Baden-Württemberg. Kretschmer then turned his father’s nine-millimetre pistol on himself during a shoot-out with police.

Apparently the club has no record of the boy taking target practice on his own even though people saw him there.

After the first victim of the Winnenden school massacre was buried over the weekend, German Chancellor Angela Merkel suggested surprise visits to gun owners to see if they are storing their weapons properly.

Merkel has avoided making rash demands or suggestions for new laws following the massacre in Winnenden, but spoke on Deutschlandfunk radio on Sunday calling for more attention to be given to young people.

“We must do everything to see that children do not get weapons, and certainly that they are not encouraged to violence. We have to pay attention to all young people. That goes for parents, and it goes for teachers,” she said.

She added that authorities should consider surprise visits to gun owners to see that they have their firearms locked away as prescribed by the law.

Meanwhile students from the school began their lessons again at another location on Monday morning, the state educational authority announced. About one dozen mental health workers have been made available for those in need of counselling.