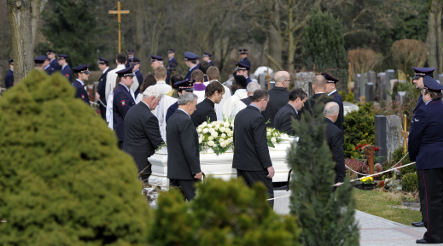 Merkel has avoided making rash demands or suggestions for new laws following the massacre in Winnenden, but spoke on Deutschlandfunk radio on Sunday calling for more attention to be given to young people.

“We must do everything to see that children do not get weapons, and certainly that they are not encouraged to violence. We have to pay attention to all young people. That goes for parents, and it goes for teachers,” she said.

She added that surprise visits should be considered from authorities to gun owners to check they have their firearms locked away as prescribed by the law.

Charges could be brought against teen gunman Tim Kretschmer’s father if it is thought he was negligent in storing his extensive collection of firearms, which included the pistol which his son used in the massacre – and which police say he took from his parents’ bedroom.

The possibility of such charges being brought would increase if it were to be shown that Kretschmer had shown dangerous tendencies.

His parents have denied reports that he had been having psychiatric treatment for depression, despite statements from police, prosecutors and the head of the clinic concerned, that he had.

The parents’ lawyer Achim Bächle told news agency AP, “There was no psychotherapeutic treatment of the boy,” before adding that out-patient treatment was something completely different.

Pupils at the Albertville school, where Kretschmer killed nine children and three teachers, were allowed to return there to pick up personal belongings they had left there during the massacre.

They will not be expected to return to school for at least a week, although facilities are being provided for them to talk with psychologists and teachers in other schools, Wolfgang Schiele, head of the regional school authority said on Sunday.