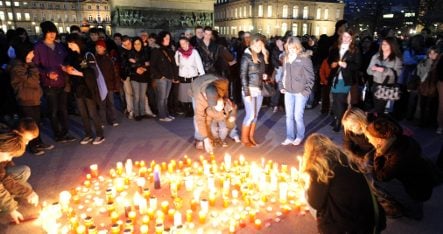 Detectives investigating the massacre have said Kretschmer spent the evening before he shot dead 15 people, blasting away at digital victims on his computer.

They told Der Spiegel magazine that the 17-year-old logged onto his computer at around 7:30pm, and spent at least two hours playing ‘Far Cry 2’ an ‘ego shooter’ game in which the player sees his own weapon pointing at those he has to kill.

This particular game takes place in a fictional country, where the player has to shoot dead as many ‘weapons dealers’ as possible. Kretschmer also had the shooter games ‘Counter-Strike’ and ‘Tactical Ops’ installed on his computer.

The Bavarian state government, which tried but failed to ban such killer games in its region two years ago, seems likely to try again in the light of this latest massacre.

Horst Seehofer, state premier, said in this weekend’s Bild am Sonntag newspaper “I intend to talk with my cabinet on Tuesday about the killer game ban, as well as the storage rules for weapons, and above all, about more prevention measures.”

Meanwhile Kretschmer’s parents have contradicted reports that he had been receiving psychiatric treatment for depression, as was reported by the police during the week. Communicating through lawyer Achim Bächle, they said he had never had such therapy.

Yet Matthias Michel, head of the Weissenhof clinic in Weinsberg told the SWR television station on Thursday, the day after the massacre, “The culprit was treated by us, in 2008, on an out-patient basis, in that he had a total of five appointments here with us, and also in the clinic for child and youth psychiatry appropriate for his age, in the out-patient section.”

Kretschmer’s distraught grandmother Ruth and grandfather Wilhelm have spoken with Bild newspaper, saying he was a normal boy who would visit them frequently.

“We still cannot believe it, he was just a normal, quiet boy for us,” said Mrs Kretschmer.

Her husband said, “He was here last Sunday with his parents, our son. Tim was quiet, but not quieter than normal. He lay on the floor with the cat and played and cuddled with it, something he always liked to do.”

After Sunday lunch together, and later coffee and cake in the afternoon, the younger part of the family left, said Mrs Kretschmer.

“We did not notice anything unusual when he left. He said, ‘bye gran’ just like he always did. We have been trying and trying to figure out if there was something, but there was nothing.”

But despite his father’s well-known love of guns and shooting, Tim never talked much about his own passion for firearms, she said.

“He never said much. He grew up with it. When he was 14 his father took him to the gun club. But the weapons at home were always properly locked away.”

Kretschmer’s great uncle, Hermann, told the paper he had once thought he should speak to the boy when he saw him sitting quietly alone.

“It was in the middle of February. He was at ours, and sat in a chair, hardly saying anything. He was remarkably withdrawn. I considered asking him, talking with him. But I didn’t do it. What would he have said?”

It also emerged at the weekend that Kretschmer had commented on previous school massacres, in a discussion forum.

Der Spiegel magazine reports that he used the name ‘JawsPredator1’ to post the comment, “The funny thing is that even when whoever it is gives warning, no-one believes them.”

Investigators have still not discovered whether a supposed warning posted by Kretschmer on an internet site was actually sent by him.