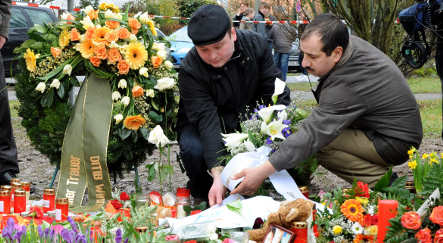 “Shit, I’ve had enough, I am sick of this crappy life,” Tim Kretschmer allegedly wrote on a message board only hours before he went to his old school and shot dead nine students and three teachers. “I might get out alive, but you will certainly hear about me tomorrow. Remember the name Winnenden.”

The announcement ignited a storm of interest, but a few hours later Krautchan.net posted a notice denying that the message had been written, and suggesting that it was a photoshopped fake. The site has been shut down due to the volume of traffic although discussions are on-going at various other sites.

But on Friday, Baden-Württemberg state premier Günther Oettinger said at a press conference it would take at least two more days for the other computers in the house to be examined.

Police will also question the two young people who had contacted them to tell them about the alleged Kretschmer posting.

“We are looking at the computer we took from his room as well as a number of other computers in the family house,” Thomas Maile, spokesman for the Waiblingen police told The Local.

He said soon after the police saw the Krautchan.net website notice claiming the post was a fake.

“We are still examining the computers in the house to try to get to the bottom of it. We hope to be able to release a definitive statement by the end of the day,” he said.

People familar with the website say many Krautchan.net users are considered pranksters with an often cynical sense of humour.

Rech told the Süddeutsche Zeitung he was aware he might have been duped.

“I consistently made clear that we were dealing with the initial stages of the investigation. It must now be clarified how the father of a 17-year-old boy could claim that he saw the posting before the act,” he told the paper.

“Some crazy person has seemingly wanted to put a terrible forgery out into circulation.”

He said his officers had established that the message had not been written on Kretschmer’s computer. “It must have been created afterwards,” he said.