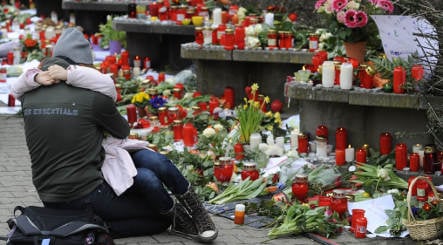 A day after 17-year-old Tim Kretschmer killed 15 people on Wednesday, Germany is grappling with the causes and consequences. The authorities say the teen had been in psychiatric care and he had announced his intentions on the internet before the bloodbath. But the country’s main papers on Thursday can’t agree on the best way to prevent such school rampages in the future.

The centre-left Süddeutsche Zeitung argues that stricter gun laws wouldn’t prevent similar tragedies, but better checks on people already possessing a firearm would be a step into the right direction.

“Even owning a weapon is tied to several obligations,” the paper points out. “The father of the deadly shooter did not fulfill these and therefore he’ll have to be held accountatble.”

Conservative daily Frankfurter Allgemeine Zeitung instead focuses on the fact that the current tragedy is almost certain to animate others to copy it.

“The images of the rampage encourage politicians to voice their outrage, shock and how dumbfounded they are. It encourages the police to fine tune their video simulations and role-playing for such massacres,” the paper argues. “Why shouldn’t the images of these massacres encourage all kinds of people but not the next person set to cause another massacre?”

Berlin-based daily Der Tagesspiegel sees the shooter as a product of his environment and German society, which failed to offer him help to escape his inner aggressions.

“The school, his friends and his parents, didn’t offer him this chance, which is every child’s right. Now, as the culprit will have calculated, he is taken seriously. The price to pay for a failure like this is unacceptable,” the paper writes.

The right-wing paper Die Welt, on the other hand, argues Germany much look at what motivated the teen gunman in order to keep it from happening again. “Prevention focused on perpetrators must be broadly expanded so as to see early warning signals,” the daily writes, adding that security must also be increase at the nation’s schools. “At every airport and at many companies we are subject to search, but anyone can enter a German classroom unchecked.”