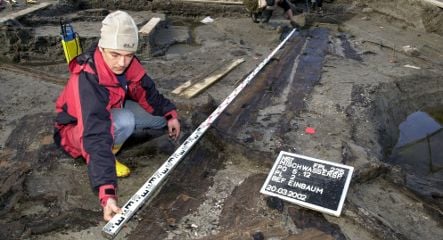 The two 7,000-year-old wooden boats and a third one thought to be around 6,000 years old, were hailed as a sensation when they were found during construction work on the Baltic coast near Stralsund in Mecklenburg-Vorpommern seven years ago.

But now they are effectively ruined, after a lack of funds resulted in them being stored inappropriately. “It is a loss for Germany if not for the whole world,” said Andreas Grüger, director of the Stralsund historical museum.

The boats had been entrusted to the Authorities for Culture and Preservation of Ancient Monuments in Schwerin for restoration and conservation. But Michael Bednorz, head of the State Office admitted that financial difficulties meant that they were kept in a shed instead of an appropriate space.

“The log boats are only an example for our problems,” he said.

“They are a drastic illustration of what happens when the regional authorities cannot fulfil their obligations.”

Although much damage was inflicted during the first two years of storage, they were then further damaged when the shed they were stored in partially collapsed in 2004. Yet still they were not moved to safety.

The state office’s storage facilities have less than a good reputation – mice have chewed up ancient documents in the main archive mice while a water leakage destroyed precious artefacts in another depot.

The remains of the boats have now been sent to the University of Applied Sciences in Berlin where students are planning to investigate the extent of the damage and draw up a plan to save at least fragments.