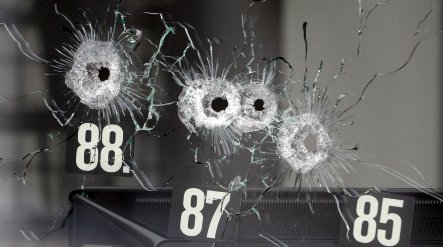 Tim Kretschmer told another boy that he was sick of his life, had weapons and was going to take revenge at his former school, the night before he shot nine students and three teachers dead.

After fleeing the scene, he hijacked a car and went on to kill three other people before apparently committing suicide while in firefight with police.

“Shit, I’ve had enough, I am sick of this crappy life,” the frustrated teen wrote at around 2:45 am on Wednesday on online forum krautchan.net, Heribert Rech, Baden-Württemberg’s interior minister said at a press conference.

“It is always the same, they all laugh at me all the time, no-one realises my potential. I’m serious Bernd, I have weapons and will go to my old school and really burn them up. I might get out alive, but you will certainly hear about me tomorrow. Remember the name Winnenden.”

But then realising he might have given away too much of his plans he said: “Don’t call the police. I’m just being a troll.”

The 17-year-old boy in the neighbouring state of Bavaria with whom he was chatting did not believe him and answered simply ‘LOL’ – meaning ‘laugh out loud.’ He only alerted his father to the online exchange after hearing news of the school massacre the following day.

Authorities also revealed on Thursday that Kretschmer had been having extensive psychiatric treatment for depression, including several sessions in a hospital, but had broken off the following out-patient treatment several months ago.

And it emerged that Kretschmer’s father not only had more than a dozen guns in the family home, but also 4,600 rounds of ammunition. The teenager had taken more than 200 rounds with him when he left the house on Wednesday morning, along with his father’s Beretta 9mm pistol.

Of these, he fired 60 in the school, a further nine outside and then 44 more when he was cornered by police in the nearby town of Wendlingen.

An amateur video of the gunman’s final moments also surfaced online on Thursday, after a bystander apparently filmed Kretschmer’s shoot-out with the police in a car parking lot.

The grainy video shows him firing at officers before kneeling down. An edited version then skips to him lying dead on the ground as police swarm around him. Kretschmer was reportedly hit in the leg by the police, which caused him to turn his gun on himself.

Speaking of Kretschmer’s extensive experience with guns, Rech said the father had often taken his son to the local shooting club. “The culprit was practiced in the use of firearms,” he said. Earlier reports suggested many of the victims had been accurately shot in the head.

The state prosecutor Siegfried Mahler even suggested that Kretschmer’s father could be investigated for manslaughter if it emerged that the teenager had previously talked of shooting people.

One of the businessman’s many guns had not been stored in a locked cupboard, which would normally be a minor offence, but could be taken much more seriously if it were to be shown that Tim was known to present a danger.

But Mahler said that outwardly Kretschmer had been regarded as a normal, if quiet and withdrawn boy, who had nonetheless been seen by neighbours as friendly. “He did not have many friendships, but he did have some,” said Mahler. “And for some time he was interested in a local girl, even if this had not led to a close friendship.”

He said detectives had examined Kretschmer’s computer overnight and had found a number of violent computer games, which Mahler stressed, were commonly played by boys of that age.

Kretschmer had been training with weights over the last three years, said Mahler, and had been arm-wrestling in order to build up his upper body strength for table tennis, which he played with his father.

His father had also encouraged his love of shooting and built him a shooting range in the cellar for him to practice, said Mahler.

State police chief Erwin Hetger said six threats of further massacres had been received by police in the state, and a school in Freiburg had even been evacuated.

A 22-year-old student in Halberstadt was given a five-month suspended sentence on Thursday, after admitting to threatening a rampage at his vocational school early in the morning.