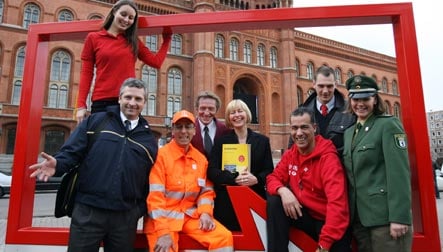 “A few years ago we did a study that showed that non-Germans consider Berlin a place full of grumpy and boring people,” said city spokesman Richard Meng. “We need to show the world that this is not true.”

As part of the campaign, civil servants will hand out ironic postcards printed with legendary grumpy Berlin phrases such as “What do you think you’re looking at?” and “Do I look like an information desk?”

The idea is to poke fun at the stereotype of the grumpy Berliner, known for having Berliner Schnauze or ‘Berlin snout’, big-city attitude. The cards are also meant to show that it is possible to be courteous and friendly on a day-to-day basis.

“These cards are fantastic, they show that we don’t always take ourselves seriously and that we can laugh at ourselves too,” Meng said.

Berlin, which is this year celebrating the 20th anniversary of the fall of the Wall, is visited by more than eight million tourists each year.

“2009 is a huge year for us,” Meng said, “We’re hosting the Athletics World Championships and want to show the world that we are a friendly and worldly capital city at the heart of Europe.”