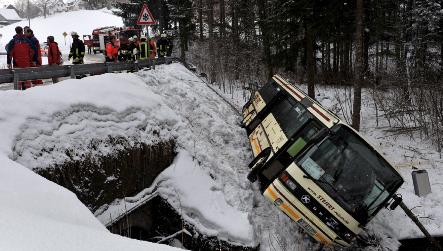 “The bus hit a sharp right-hand bend, and started skidding,” a police spokesman told The Local. “It then turned onto its side and ploughed through the barriers and then slid down a steep incline into a river bed.”

The accident occurred shortly before 7 am, on the road between Bonndorf and Lenzkirch in southern Baden, where five centimetres of fresh snow had fallen over night.

The roughly 40 children inside managed to get out of the bus by the time rescue services arrived. The driver also suffered light injuries.

“We are relieved – we got off lightly,” the spokesman said. “Four of the children are in hospital with broken bones and bruising. None of their injuries are life-threatening. An accident investigation is underway and officers will be questioning the driver, who was not injured in the accident.”

He said seatbelts in school buses are not mandatory in the region. The bus was expected to be retrieved and the road re-opened during the afternoon.