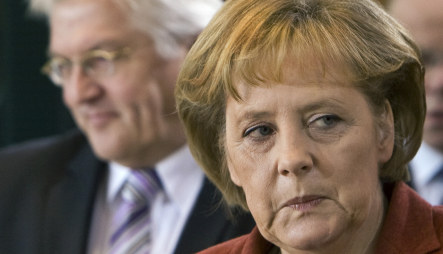 The results mean that an election which seemed like a shoo-in for the CDU/CSU in combination with the liberal Free Democrats – up one point at 17 percent, in third place – now looks less certain.

Leading members from Merkel’s conservatives aired their frustrations on Sunday, and Wolfgang Bosbach, their deputy chairman in parliament, worried that voters may stay home on September 27.

“Maybe we have strategists who seriously believe that no great attention has to be paid to conservative voters and their concerns because they will vote CDU/CSU anyway,” he told Focus magazine. But there is a big danger, he said, “that this will not pay off because the party faithful will just stay at home or vote FDP,” he said.

Günther Oettinger, state premier of Baden-Württemberg, one of Germany’s wealthiest and most populous states, also said he had concerns.

“It has to be clear that the chapter of the ‘grand coalition’ is over, and that a new one is being opened in which the CDU states clearly what it stands for,” Oettinger told newsmagazine Der Spiegel.

Merkel’s management of the Opel crisis is hurting her most right now. GM Europe executives came to Berlin this month to ask for more than €3.3 billion ($4.2 billion) from European governments, most of which would come from Germany where the auto maker has its largest operations.

The request has put Merkel, in office since 2005, in a tricky position. Some 750,000 Germans work in the struggling auto sector, not just for car makers like BMW or Volkswagen but also for parts makers such as Bosch or Continental and in other related sectors.

Many of these companies have reported plunging sales, laid off workers, stopped production and warned of shrinking profits, and Berlin is under pressure to step in.

Helping Opel would leave Merkel vulnerable to accusations that she has abandoned her free-market principles, potentially driving voters towards the FDP.

But Merkel would also pay a political price for spurning Opel, a German industrial icon that employs 26,000 workers.

For now it is uncertain what Merkel will decide. A government spokesman said on Friday that no decisions will be made for “several more weeks.”