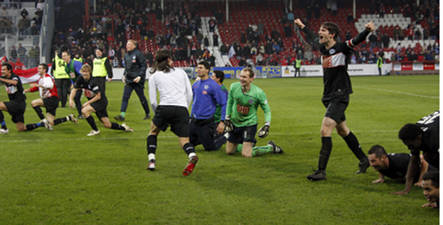 Bayern Munich’s 5-1 home thrashing of Hannover propelled them three places up the table to tuck in behind Berlin though they have the same number of points as Hoffenheim, VfL Wolfsburg and Hamburg in a tight pack of clubs at the top.

Ukrainian striker Voronin was in scintillating form in the eastern derby to give him 10 league goals for the season and boost Berlin’s title chances.

Turk Cagtas Atan gave Cottbus an early lead before goals in the 34th, 45th and 88th minutes from Voronin sealed the win in front of a record 20,000-strong crowd.

Relegation-threatened Cottbus suffered their first home defeat in this derby match since October 2002.

Despite the victory, Hertha’s Swiss coach Lucien Favre was refusing to get carried away.

“We have taken three points but we still have a lot of work to do,” he said.

Under-pressure Bayern coach Jürgen Klinsmann had just the shot in the arm he needed as his side tested the strength of Hannover’s goal netting, blasting five into it.

Bayern, playing without star midfielder Franck Ribery, finally got the victory that staved off a continued crisis of form.

Bayern’s start to 2009 so far has been poor. Since coming back from the winter break at the end of January, they had racked up just one win combined with three defeats and a draw before their Hanover victory.

It was Hanover who went ahead, however. Jiri Stajner shot the visitors into the lead though Bayern were soon back on level terms when Belgian defender Daniel van Buyten headed home six minutes later.

By the break, Munich had scored another two goals through Miroslav Klose and Hatim Altintop before Lukas Podolski hit his fourth goal of the season on 73 minutes before Martin Demichelis finished off the scoring with a minute to go.

“We knew we needed a result today, and I think we’ve gone out and done just what we had to do. We kept it simple, and we were patient against a very defensive Hannover side.

“I’m really pleased for Lukas (Podolski). He’s scored, he’s won free-kicks, and been involved in plenty of passing moves. He and Miroslav Klose have worked really hard the whole season, and both scored today.”

Hoffenheim, however, yet again failed to show their early-season form in a goalless draw at home to Werder Bremen.

Hamburg meanwhile suffered their second successive defeat, losing 4-1 at Borussia Mönchengladbach who moved off the bottom of the table with the win.