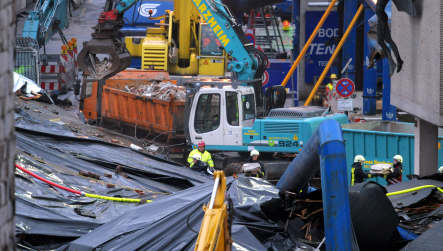 Rescuers had expected to begin the search by Thursday evening, but persistent rainfall increased groundwater levels, intensifying the danger of further collapse.

“We are working under life-threatening conditions,” leader of the 400-person rescue operation Frank Stobbe told German daily Bild. “The safety of our people has priority.”

Meanwhile rescuers still don’t know when they can begin safely searching for the two men who rented top-floor apartments in a neighbouring building and were likely buried by rubble when the falling archive tore the side of their building off.

Rescuers have located Kevin K.’s mobile phone under the rubble, but have been unable to reach it under hundreds of tonnes of debris.

“It is another clue for us,” police spokesperson Astril Gels told the paper. “But we don’t know if it is with him or is located further away.”

The young man was likely sleeping when the accident occurred, his bakery supervisor Markus Zimmermann told the paper. “Kevin was at the baking station from 3 am until 8:30 am,” he said. “We know that he called a friend using his mobile at 11 am. After that there is no trace.”

His neighbour Khalil G. was probably also sleeping at the time of the collapse, the paper reported. “He called in sick to work and then went to bed,” his brother Tarik told Bild. “We hope he is still alive.”

Authorities have said that underground metro construction nearby may have been the cause of the archive collapse.

The 1971 building housed 65,000 original documents dating from the year 922 as well as maps, films and photos and items left to the city by figures like composer Jacques Offenbach and Nobel Prize-winning author Heinrich Böll.

Officials have covered the wreckage with tarpaulins to protect documents from the rain, but historians fear that many valuable documents will be lost.