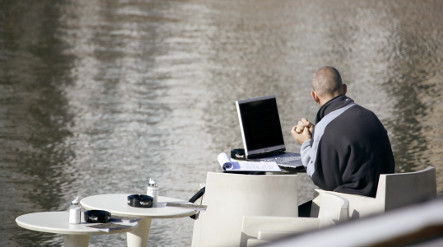 After three years of delays and wrangling, the German capital appears to be inching closer to offering internet access along its western shopping boulevard Kurfürstendamm and the eastern axis of Friedrichstrasse and Unter den Linden.

The pilot project – unique in Germany – has long been a pet project of Müller, and he has the support of Berlin’s Economy Minister Harald Wolf. Wolf has given the green light for expanding public WiFi coverage throughout the city centre if the pilot proves successful.

But what could please both web-happy tourists and Berlin residents alike has rankled commercial internet service providers and technology lobby groups, which fear municipal wireless internet access could distort competition.

He warned using public money to fund such public internet access could end up causing ISPs to abandon Berlin altogether. “It’s doubtful a publicly financed offering could replace this,” he said.

The industry’s concerns are echoed by the German Association for Information Technology, Telecommunications and New Media (BITKOM).

“We question whether taxpayer money should be spent providing a free internet service when commercial competition has resulted in internet providers offering an affordable and effective service in the city already,” BITKOM spokesman Manfred Breul said.

Aside from commercial sector resistance, public WiFi in Berlin could end up facing the same problems that has torpedoed it in places like San Francisco, California and Portland, Oregon. Whether Berlin could end up successfully marrying commercial and public interests remains to be seen, but Brigitte Schmidt from the Economy Ministry said the city wouldn’t be footing the entire bill for the municipal network.

“The ongoing interest in the pilot project from potential providers and investors shows there’s still a chance for a sustainable business model,” Schmidt told The Local.