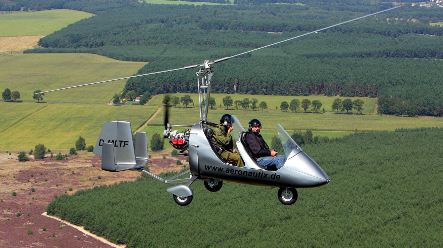 The tiny flying machine, also known as an “autogyro,” was made famous in the 1967 James Bond film “You Only Live Twice.” Now after conducting tests in the summer of 2008, a final report from the state Interior Ministry wants to make the machine part of regular police operations.

“The project has garnered interest worldwide,” the document stated, adding that it was an “innovative, safe and cost-efficient addition to the police helicopter.”

Deploying three Einstein 60/11 model gyrocopters would cost Potsdam some €180,000, meanwhile up to 10 officers would have to be trained as pilots, the paper reported.

Officers could use the zippy open rotorcraft to ferret out illegal cannabis plantations, timber thieves and enforce water sports safety.

“The availability of a gyrocopter drastically increases the discovery risk for criminals,” the report states.

But head of the GdP state’s police officers’ union Andreas Schuster told the paper the gyrocopter is an “excessive luxury project,” for which “use and costs aren’t proportionate,” the paper reported.

The machine could also only be used during warmer months – between March and October – becuase it can only fly at temperatures above 4 degrees Celsius. Schuster recommended that police rent such a machine if it became necessary for specific operations.