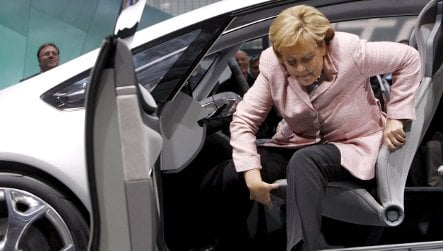 In or out, Angie? Photo: DPA

The conservative Merkel, in power since 2005, has two choices: spending billions of euros in taxpayers’ money on rescuing GM’s German unit, or letting Opel fail and putting 26,000 people out of work.

GM Europe leaders were in Berlin on Monday to argue their case with Economy Minister Karl-Theodor zu Guttenberg, presenting him with a restructuring proposal that includes €3.3 billion ($4.2 billion) in public aid.

The bailout, which could come in the form of state-backed loan guarantees or even a partial nationalisation, would see Opel stand on its own two feet and survive as a separate entity – whatever happens to its parent company.

GM said last month it could need up to another €22.6 billion in US government loans to survive the economic downturn and announced plans to slash 47,000 jobs worldwide in a last-ditch attempt to survive.

Slammed by the global recession, the once-mighty Detroit giant posted a loss for 2008 of more than €30 billion, bringing the tally from the last four years to a whopping €86.6 billion.

GM also owns Saab, Cadillac and Chevrolet and operates plants in Belgium, Spain and Britain – the latter under the Vauxhall brand. Some of the aid that it is seeking would come from these countries.

But Germany, Europe’s biggest economy, is where GM has its main operations, with Opel accounting for nearly half of GM’s 55,600 employees in Europe – operations which Opel says are viable.

Ironically, GM bought Opel, a German industrial icon since the 19th century, at another time when the global economy was in dire straights – in 1929, the year of the Wall Street crash.

Merkel, whose country, like the United States, is highly dependent on the automobile industry for jobs and exports, is not just faced with problems at Opel.

Some 750,000 people in Europe work in the struggling auto sector, not just for car makers like BMW or Volkswagen, but for parts makers like Bosch or Continental and other related sectors.

With many of these companies reporting plunging sales, laying off workers, stopping production and warning on profits, Berlin is coming under pressure to help not just Opel but others too.

And it is not just automakers. Other sectors are feeling the pinch as Germany heads into its worst recession since World War II and as banks remain tight-fisted about lending cash.

“There are plenty of small firms that would never have the idea, even in their dreams, to go to Merkel with their money problems,” Kai Carstensen, chief economist at the Ifo instititute in Munich, told AFP. “It would be unjust to say ‘Opel can have something but not the others’,” Carstensen said.

By helping Opel, the government would leave itself open to accusations of “throwing its economic principles overboard,” said Christian Dreger from the DIW economic research institute in Berlin.

But September 27’s election is looming ever larger on the horizon, and the need to win votes and secure a second term may trump Merkel’s commitment to free-market economics.

Her CDU/CSU party is currently in a “grand coalition” with the centre-left Social Democrats, and in September both want to end this unhappy marriage and form a government with a party more to their liking.

Merkel’s personal popularity rating is high but the same cannot be said of her party, whose rank and file are appalled by the prospect of nationalisations.

“She remains very popular as chancellor, but for her party the CDU this is a catastrophe,” believes Manfred Guellner, director of the Forsa polling institute.