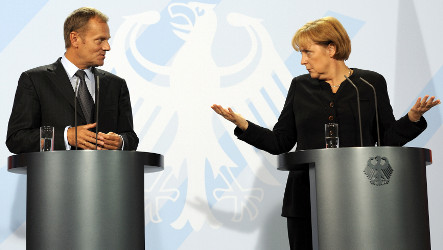 Tusks statements indicated an intense Polish dislike for Erika Steinbach, head of the Federation of Expellees (BdV), which represents Germans who fled or were expelled from their homes in Eastern Europe as a result of World War II. Many Polish associate Steinbach and the BdV are associated with Nazism and the German occupation.

Tusk said her appointment to the board would “painfully touch our Polish sensitivity about the truth of World War II.”

While acknowledging that the decision is up to the German government, Tusk asked that Polish sensibilities be taken into account. “I have always used my authority to promote good German-Polish relations,” emphasised Tusk, saying he believed this justified his decision “to offer his honest and authentic assessment.”

Merkel meanwhile reiterated her intention to take her time in appointing the board. She said the government was on its way to creating a visible symbol against forced expulsion in the spirit of reconciliation. “This spirit must also be expressed in the final stages of the appointment. This will take a few days and today’s meeting with the prime minister will not change that,” she said.

Angelica Schwall-Düren, deputy head of the parliamentary group of the centre-left Social Democrat Party (SPD), expressed understanding for Poland’s reservations about Steinbach, pointing out that in 1991 she had voted against recognising the post-war border between Germany and Poland. According to Schwall-Düren, Steinbach shows little understanding of the Polish war trauma, and has taken a “revenge-based” approach to the recognition of facts.

In the current debate around the memory of German war-expellees, Schwall-Düren believes that the Polish government has done much to recognise the German side, taking a neutral position on the proposed foundation, and removing anti-German factions from the government in Warsaw. She called on Merkel to do likewise.

For their part, members of the centre-right Christian Democrat party (CDU), which Merkel leads, criticised the SPD for stirring Polish sentiment against Steinbach. Schwall-Düren’s counterpart in the CDU, Wolfgang Bosbach, singled out the SPD party member and Foreign Minister Frank Steinmeier, saying, “It should be the foreign minister’s duty to convince our Polish neighbours that Erika Steinbach would be a good representative of the Federation of Expellees in the foundation. Instead, he is doing the exact opposite, and is damaging the interests of the refugees, but German-Polish relations too.”