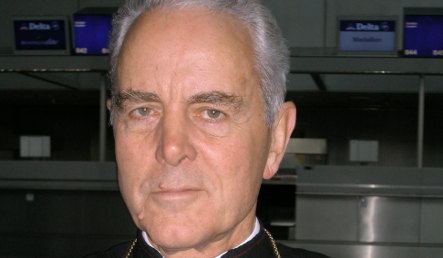 “The Holy Father and my superior, Bishop Bernard Fellay, have requested that I reconsider the remarks I made on Swedish television four months ago, because their consequences have been so heavy,” Williamson said in a letter to the Pontifical Commission “Ecclesia Dei,” published Thursday in London.

Williamson, a member of the ultra-traditionalist Roman Catholic fraternity called the Society of Saint Pius X, said that Nazis never used gas chambers to kill Jews during the Second World War, and that only up to 300,000 Jews died in the Holocaust. His remarks sparked outrage from the public.

The television interview was conducted in November but broadcast on January 21, just three days before Pope Benedict XVI decided to lift Williamson’s excommunication. The bishop was among four whom the pope welcomed back in an attempt to heal a decades-old split with traditionalists who did not accept the reforms of the Second Vatican Council of the early 1960s. But the pope’s untimely decision was lambasted by the media, spurring the Vatican to ask Williamson for a public apology.

“Observing these consequences I can truthfully say that I regret having made such remarks, and that if I had known beforehand the full harm and hurt to which they would give rise, especially to the Church, but also to survivors and relatives of victims of injustice under the Third Reich, I would not have made them,” Williamson said in Thursday’s statement.

But the Central Council of Jews in Germany rejected the apology, calling it “a third-class regret.”

“Williamson doesn’t take back his dishonest assumptions regarding the Holocaust and its denial at all, he only regrets that his words caused harm,” Dieter Graumann, deputy chairman of the Council told daily Handelsblatt on Thursday.

In the statement, Williamson further explained that he only gave the “opinion […] of a non-historian,” a perspective “formed 20 years ago on the basis of evidence then available, and rarely expressed in public since,” and added, “To all souls that took honest scandal from what I said, before God I apologize.”

But Williamson’s apology has only stoked the Jewish Council’s outrage. “As if there were any doubts about the existence of the Holocaust 20 years ago,” Graumann commented on the bishop’s letter. “No – with this thoroughly knotted explanation, Williamson unfortunately doesn’t take anything back. In fact he allows the conclusion that he still holds to the Holocaust denial that he’s already lived out pathologically for decades,” he added.