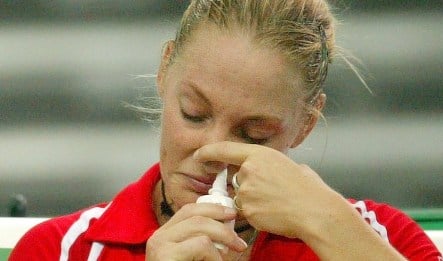 Some 100,000 Germans are addicted to nose sprays, according to the German Central Office for Addiction (DHS). “And the estimated number is probably too low,” Hamburg ear, nose and throat expert Stefan Tesche told the magazine.

While common nose sprays can be a blessing when it comes to freeing blocked sinuses, overuse can lead to addiction, recurring symptoms and proper panic attacks. Users can suffer tachycardia and even fear of suffocation. “They think they can’t breathe anymore, they can’t survive without the spray,” another doctor from Berlin’s Charité hospital, Christian Paschen, told the paper.

The drugs in these sprays cause the nasal mucous membrane blood vessels to immediately constrict, but the instant relief is only short-lived and the symptoms that soon return are worse once the chemicals wear off. The blood vessels swell to a greater extent and sinuses are blocked again – intensifying the symptom the spray was meant to resolve in the first place.

After just 10 to 14 days of regular use, users need higher doses in more frequent intervals which can not only lead to addiction but also damage the sensitive lining of the nose, experts told the magazine.

In the worst case, nose spray addicts suffer from Stinknase or ozeana. Germs and bacteria breed on the dried up mucous membranes in the nose, damaging the cartilage and causing a disgusting sweetish-rotten smell.

Many nose spray junkies end up seeking out addiction specialists like psychologist Rüdiger Holzbach at the LWL clinic in Warstein, who said the emotional conflict for addicts can be astounding. “There is a real urgency behind it,” he said.

Experts recommend alternative treatments that include using lower-dose nasal sprays for children, saltwater sprays or the “one-hole-method,” where addicts only use spray in one nostril while the membranes in the other have time to regenerate. When they can breathe through their nose again, the treatment must stop completely, the magazine said.