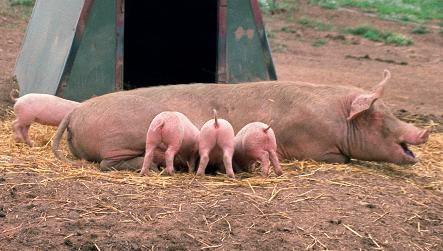 A file photo of an enormous pig. Oink! Photo: DPA

“Several witnesses called around 10 pm and a patrol car was there fairly quickly,” police spokesperson Elvira Edt told The Local.

Giving new meaning to the phrase “road hog,” callers said they’d seen a “monster pig” that was so big it was blocking the motorway and jamming traffic.

Police officers were able to persuade the 200-kilogramme (440-pound) swine away from the road, but then had to find its owner. After what they called a “painstaking search,” police stood waiting with the sassy sow until the owner came to pick her up.

“She was about 3 kilometres from home and they obviously weren’t going to go tramping through the countryside looking for the pen,” Edt told The Local.