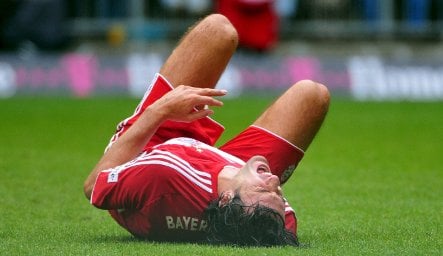 Bayern have lost three of their last four league games – including an embarrassing 2-1 reverse at home to strugglers Cologne on Saturday – and need Toni back for their trip to Lisbon’s Jose Alvalade stadium.

Toni limped off during the first-half of Bayern’s 2-1 defeat at Hertha Berlin ten days ago with an Achilles tendon injury, but Bayern coach Jürgen Klinsmann is optimistic the striker, top-scorer in the league here last season, will start.

“I am confident he will play,” said Klinsmann. “Toni has looked good in training and we are hoping he will play.”

In his absence, Lukas Podolski and Landon Donovan played a half each against Cologne, but Klinsmann said he was far from happy with the result.

“You could clearly see that his presence was missing against Cologne,” said Klinsmann. “He always takes up two markers which gives more space for our other striker Miroslav Klose.”

And Bayern chairman Karl-Heinz Rummenigge said the German giants need to buck up their ideas if they are to have any chance of reaching the quarter-finals.

“We’ve lost two in a row in the league, and we need to get out of this rut very quickly, starting with Wednesday’s game in Lisbon,” said the Bayern boss.

Although Toni could have played against Cologne, Klinsmann opted to keep Toni and Brazilian defender Lucio back in reserve for the Lisbon game.

Recent results means Bayern are fourth in the Bundesliga while Sporting are third in the Portuguese league. They enjoyed a 3-2 win over Benfica on Saturday with two goals from Brazil-born forward Liedson, who has expressed an interest in playing for Portugal.

But despite Bayern’s poor recent run history is against Sporting, who are aiming to reach the Champions League quarter-finals for the first time. In 14 games against opponents from Germany Sporting have yet to book a victory.

Moreover, Bayern’s record in European club competition against teams from Portugal is equally daunting: in 20 games the Bundesliga champions have only tasted defeat on one occasion and that came in the 1987 European Champion Clubs’ Cup final.