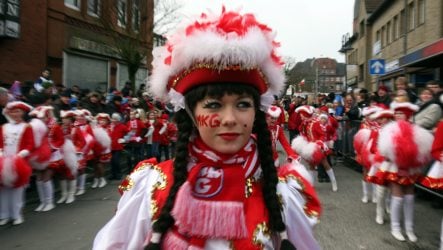 With an eye on the general election in September, one display featured a giant Chancellor Angela Merkel as Miss Germany in a bikini striped with the black-red-gold of the German flag. The float was the cause of some controversy last week when it was revealed that the larger-than-life papier-mâché chancellor was to be clad only in German eagle pasties, but Karneval organisers arranged for the only slightly more dignified bikini at the last minute.

Another float was festooned with US President Barack Obama and the Statue of Liberty telling him to whip the flagging American economy into shape. Additional floats featured minor German celebrities and the North Rhine-Westphalia State Premier Jürgen Rüttgers.

Organisers said they expected about one million costumed revellers to turn up for the parade – a bit short of last year’s 1.2 million party-goers.

Cologne’s rival Rhineland city Düsseldorf started its festivities a bit later and was a bit braver with its politically and economically motivated floats, featuring State Premier Jürgen Rüttgers as a skinhead and Angela Merkel portrayed as Rome’s naked wolf.

The German carnival season kicks off November 11 and culminates this week with the observance of Ash Wednesday.