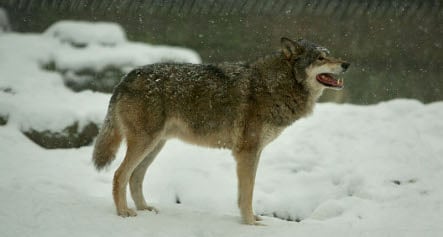 Ice cracks under the tyres as Ilka Reinhardt guns her Subaru over the frozen, rutted path that runs between a military training ground and a coal mine.

Reinhardt, a petite biologist in the Lausitz region of Saxony near the Polish border, is one half of Germany’s top team of wolf experts. She stops the car and climbs out, having spotted some scat on the side of the road. Rarely has dung commanded such fascination or been accorded such respect.

She turns it over, examining the fur and bone fragments (wolves tear chunks off their prey and swallow them whole) before putting it in a clear plastic bag to be sent for analysis in nearby Görlitz, joining 1,600 other lupine turds the scientist has collected. Finally she records its location.

All the attention is for good reason: Reinhardt studies the numbers, movements, diet and health of the few dozen wolves that have recently established a fragile paw-hold in Germany for the first time in 200 years.

Click here for a photo gallery on wolves in Germany.

From medieval times, the feared Canis lupus, or grey wolf, was hunted here and finally driven out in the 19th century, when the last packs retreated eastwards into the remote forests of Poland all the way to Russia. Now, it is back.

Scientists like Reinhardt are thrilled. But not everyone in Germany shares her enthusiasm. Between atavistic fears about the wolves made notorious by the Brothers Grimm, propaganda from the fringes of the hunting lobby and sensationalist tabloid reporting, many Saxons are convinced it’s a matter of time before someone is eaten.

”If people have no experience of the real animals, all they have is the old stories like little Red Riding Hood,” Reinhardt says. ”Most people don’t hate wolves but when they are told over and over that they are dangerous, of course, they start to believe it.”

There are five packs in Saxony of up to eight wolves each, plus a couple of loners in neighbouring Brandenburg, making 40 or fewer in total in the entire country.

They have migrated to Germany from Poland in the past few years. The Lausitz wolves roam over the military area, dodging tanks and explosions. The Brandenburg wolves live on a disused army base littered with Soviet-era ordnance.

It’s not that wolves like bombs, Reinhardt says, rather that these places are safe because they are free of hunters. Wolves are protected under both German and European law. But last year, two men were fined €10,000 and €4,800 respectively for shooting a wolf in Lower Saxony and are in the process of appealing. In Brandenburg, a forest ranger found the body of another young wolf killed by a bullet.

Reinhardt believes others have been shot by hunters who see them as competition for game such as deer. Farmers are compensated for attacks on their sheep and so most have accepted the wolves’ return, she says.

But the motto of some hunters, she says, is: ”Shoot, shovel and shut up.”

Reinhardt and her business partner Gesa Kluth run Lupus, a private consulting firm that advises governments on managing the return of the predators. They help farmers protect their sheep flocks, respond to wolf sightings and educate the public.

On the other side of the public opinion battle is the hunting lobby group, Safety and Species Protection, which claims Saxony has closer to 100 wolves and that the growing packs pose a danger to people.

”Wolves are predators and therefore they are dangerous to wild animals and people because these are part of their range of prey,” says the group’s spokesman Christian Lissina. ”In a society where people barely know that eggs come from chickens and butter comes from cows, this unfortunately gets forgotten.”

Fear and loathing in the Lausitz

Lissina accuses Reinhardt and Kluth of preaching from the comfort of an office and of being ”unscientific” even though they are both experienced wildlife biologists.

”We tried to talk to them for a while,” Reinhardt says of the group. ”We invited them to lectures and information sessions but after a while we were just hitting our heads against a wall so we gave up.”

Wolves, like most wild animals, will avoid humans and are only dangerous if they are routinely fed and become habituated, she says.

The mainstream hunting lobby also distances itself from the anti-wolf campaigners.

Torsten Reinwald, spokesman for the DJV German Hunting Association, branded Lissina’s outfit ”fundamentalist” and said his group has no problem with the return of wolves.

Nevertheless, the anti-wolf campaign has been picked up by Germany’s mass-market papers such as sensationalist daily Bild.

”They write things like, ‘They will eat your children’,” says Steffen Butzeck, who studies the Brandenburg wolves. ”The question is, do we deserve wolves? I’m not always sure we do.”

A wolf in Granny’s garden?

Back in the Lupus office, Gesa Kluth puts down the phone after a half-hour conversation trying to reassure an elderly lady who thought she’d seen a wolf in her back garden.

”We are always getting calls from people saying, ‘There is a young wolf and it’s very bold, behaving very strangely.’ So we go out with our blowpipes and tranquilisers and 95 per cent of the time, it’s a dog,” Kluth says.

Among other things, Reinhardt and Kluth have been accused of secretly releasing wolf cubs into the wild to boost the population.

”It’s an ideology,” Kluth says. ”People tell us … ‘When the first child gets attacked by a wolf, it’ll be your responsibility.”’

All they have to dismiss such fearmongering are the facts, which are so prosaic as to verge on disappointing.

Only nine people in all of Europe have been killed by wolves since World War II and five of those cases involved rabies.