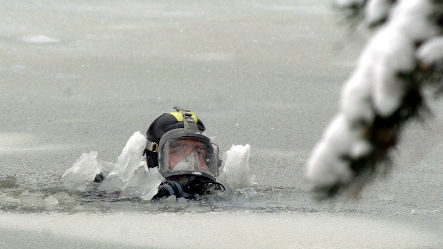 The 30-year-old man was on an outing in Kloster Lehnin with his son on Sunday, police said, but was reported missing at 7:30 pm when he and the boy didn’t return home as expected. Kloster Lehnin, or Lehnin Abbey, is a mediaeval Cistercian monastery, popular as a day trip destination.

Around 50 emergency rescue workers went looking for the pair and found a hole in a woodland pond at 10 pm Sunday evening. They found the bodies under the ice around 1 am, police said.

The two would not have been able to survive long in the water, which was no more than 4 degrees Celsius, a spokesperson said.

After a record cold snap in January one man died and 19 others had to be rescued after they fell through thin ice on Bavarian lakes.