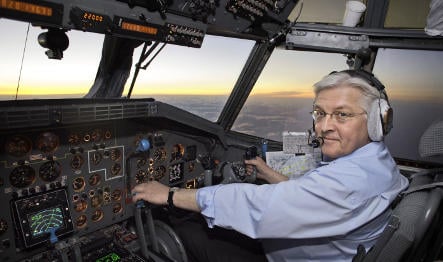 Steinmeier appeared to set out his stall for the next German general election in September, in which his Social Democrats (SDP) will challenge Chancellor Angela Merkel’s party.

“To recover from this will require more than crisis management,” he told the paper, in comments published just hours after European leaders met in the German capital to agree on the need for greater regulation and increased funding for the IMF to avoid a repeat of the global economic crisis.

“It will take many years of work to restore people’s confidence in this economic system and its rules.” He added: “The turbo-capitalism of the past few years is dead, irrevocably so. We must now create a new order for the future. The conditions for this are auspicious. This shock is deep, not only in continental Europe but in the US and UK. In this situation there is not just an opportunity but a duty to act.”

Steinmeier proposed extending the minimum amount of time shareholders must hold a company’s stock to avoid having to pay capital gains tax, and called for the German government to set limits on the amount of debt private equity firms could take on when they were taking over companies.

The minister also said the government should be willing to directly intervene in key industries, rather than rely on fiscal stimulus plans, because its industry had “become so valuable, also for Europe, that we cannot afford to give it away light-heartedly.”

“We must try to preserve our production capacities and value-added chains,” he added.