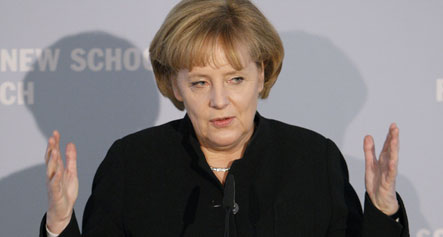 “There should be no more gaps” in the international regulation of financial products, Merkel said in her weekly video posted on the Internet.

She also said Sunday’s meeting in the German capital, gathering leaders from Europe’s major economic powers, must decide on measures for a united European position on the financial crisis ahead of an April G20 summit in London.

Among other measures, the German government is pushing to reinforce rules for hedge funds and better rating systems to avoid similar meltdowns in the future. It has also proposed a “risk atlas” to analyse the evolution of international risks to better prepare for them.

But squabbles behind the scenes over protectionism may hinder efforts to present a united European front before US President Barack Obama’s first trip to the continent for the April 2 meeting, analysts said.

As European members of the Group of 20 advanced and developing economies, the leaders of Britain, France, Italy and Spain will join the talks in Berlin hosted by German Chancellor Angela Merkel.

Top of the agenda at the talks will be reforming global financial regulation and international economic institutions in the wake of the banking crisis that has plunged Europe into a deep recession.

Britain’s Prime Minister Gordon Brown, who will chair the April meeting, set the tone Wednesday, calling for a “grand bargain” between world powers to deal with “a global problem that can only be solved with a global solution.”

But behind what is likely to be a public face of unity in Berlin, leaders have voiced concern over French plans to lend carmakers billions of euros on condition that they keep jobs and assembly lines in France.

French President Nicolas Sarkozy’s plan is viewed by many in Europe as exactly the sort of protectionism that should be avoided.

Following a meeting with Merkel on Thursday, Barroso said: “If one country takes a decision that is harmful for another member country, it is not good,” adding that this would “destroy jobs.”

Aurelio Maccario, chief eurozone economist at Italian bank UniCredit, said the French plan is likely to cause tensions at the meeting.

“I heard and I read that behind closed doors, discussions are very, very, very lively,” he told AFP.

In public, however, leaders are poised to repeat a commitment to avoid resorting to protectionism as a response to the world financial crisis.

They may also discuss Obama’s $787-billion stimulus plan to jump-start the US economy, which has raised fears in some quarters over protectionism.

Politically, the gathering will also seek to draw a line under an apparent snub to Merkel, who was not invited to a similar preparatory meeting last December in London ahead of an EU summit.

Ahead of Sunday’s meeting, German Finance Minister Peer Steinbrück sought to play down expectations, warning: “We have to be careful with this quick succession of summits that we do not raise hopes that can not be fulfilled.”