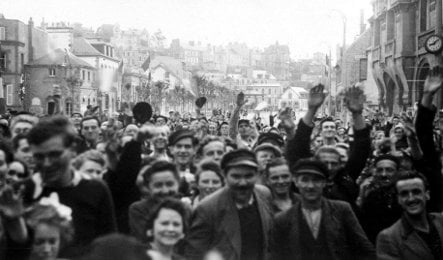 The French being liberated. Photo: DPA

“The German government is aware of the difficult fate of the French ‘war children.’ The interior ministry will … accommodate those who want to apply for German citizenship,” a spokesman told news agency AFP.

The Süddeutsche Zeitung daily reported earlier Thursday that German citizenship would be awarded to the applicants, who often suffered discrimination in France, as a “symbolic gesture to make up for past wrongs.”

“We will act generously with applications. For example, we will not levy fees,” the spokesman said.

The German foreign ministry has worked “intensively” with its French counterpart on the subject, he added.

Nevertheless, each of the offspring would have to apply for German citizenship individually, he said.

French Foreign Minister Bernard Kouchner has previously called for “recognition” of the suffering of the children – now in their 60s – who were stigmatised in France as “bastards of the boche,” a derogatory wartime French term for German soldiers.

Researchers estimate there were around 200,000 such children.