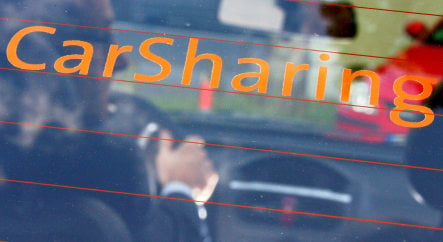 Car sharing requires subscribing to a service that gives access to a fleet of vehicles reserved by telephone or via the internet and which are often picked up though the use of a magnetic card.

A major difference with rental agencies is that the cars are reserved for subscribers and can be used for very short periods of time. The concept provides regular access to an auto without having to pay for either the vehicle or its maintenance and insurance and helps get around the problem of parking in many urban areas.

In Germany, where cars remain a major consumer item, the number of people using shared autos has grown from 116,000 in early 2008 to 137,000 one year later. The number of cars shared increased by 22 percent to 3,900 over the same period. Each car is therefore shared, in theory, by 35 people.

Over roughly the same period, German auto sales fell by 14 percent, a trend seen in mature economies worldwide. The number of German garages where the cars can be parked and picked up freely has grown by 16 percent to 1,850 the federation said.