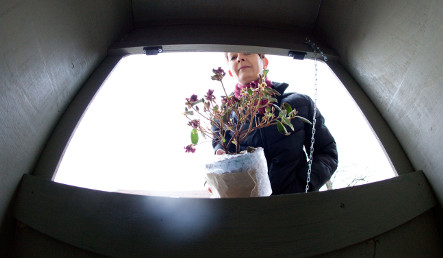 Artists Haike Rausche and Torsten Grosch invented the 80 by 60-centimetre plant hatch so that frustrated and overwhelmed plant owners could have a guilt-free and ‘humane’ option for passing off their plants, initiator Rausche told news agency DPA.

Shortly after the environmental art project was made available to Schöppingen art colony residents on Tuesday, someone deposited a dried out azalea into the receptacle, she said.

The Pflanzenklappe is part of a larger project called “Botanoadopt,” which aims to save plants – living entities – from being used and abused by their owners.

“The people should question their perception of nature and think about it,” Rausch said.

The plant hatch will be available for use in Schöppingen until late February, when it will go on display in Frankfurt and then travel around the country.

The inspiration for the project has a longer history in Germany, which has some 80 baby hatches located at hospitals nationwide and 130 places for mothers to give up their children anonymously.

The concept has been around for hundreds of years – the first known hatch was provided at the Vatican in the 12th Century. In Germany, mothers can place their infants in the hatch, where they find an envelope that explains their legal rights. An alarm then rings inside the hospital several minutes later, giving the mother ample time to slip away and alerting staff that there is a baby in need of care.