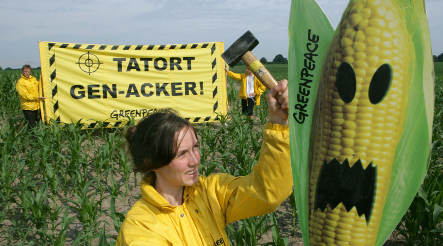 The strain in question is “MON 810” from US biotechnology firm Monsanto. Ecological concerns have spurred France and Italy to ban the corn, but it is still legal in Germany. But Aigner told the paper that she plans to review the strain to determine whether it violates German environmental standards.

“The MON 810 maize strain has an insect resistance, but unfortunately it hurts rare insects like butterflies and other organisms in addition to those that are bad for the corn,” Alexander Hissting, genetic engineering expert for environmental group Greenpeace, told The Local on Wednesday.

“We’ve been trying to get it banned for years,” he said, adding that current environmental monitoring practices at Monsanto “aren’t worth the paper they’re written on.”

If the corn is banned, it will mean the end of commercial planting of genetically modified plants in Germany, the paper said.

Aigner said she wants to allow German states to decide whether they will allow the crops, but such authority may clash with European Union laws.

Farmers plan to reduce the amount of genetically modified crop acreage they plant in 2009, which environmentalists say signals that there is no real market for such products in Germany, the paper reported.

“It’s anything but a success story, even though it’s legal,” Hissting told The Local. “Greenpeace has a map of where farmers are planting MON 810 maize and you really have to look under a magnifying glass to see it, it’s about 0.2 percent of the land.”

Greenpeace has criticised Aigner’s predecessor Horst Seehofer in the past for accepting Monsanto’s environmental testing practices. Hissting said he was hopeful that Aigner – a member of the Christian Social Union in Bavaria where GM crops are intensely unpopular – is not merely trying to make points back home with rhetoric.

“We encourage Minister Aigner to finally forbid the genetically modified corn before it is sowed in April,” he said.