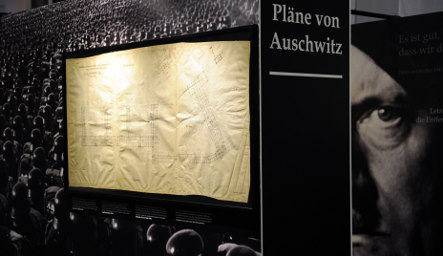 The Bild newspaper bought the blueprints when they were found and is now hosting an exhibition the publisher Axel Springer’s building until February 28.

The construction plans were presented on Monday night by an Auschwitz survivor, Vladislav Bartoszewski, the 86-year-old former Polish foreign minister. He was imprisoned in the camp in 1940-41 at age 18 and was later a soldier in the Polish resistance, the paper reported.

“The exhibition opens a frightening glimpse into the abyss,” Bartoszewski told Bild, adding that this was so “even if the exhibition objects seem harmless. Or perhaps exactly because of this. They are sketches. Construction plans. Technical drawing. Calculations and maps.”

Bild published a first look at the 28 large-format drawings dating from between 1941 and 1943 in November, on eve of the 70th anniversary of the Kristallnacht pogrom against Germany’s Jews, also known as the Night of Broken Glass.

The plans, scaled at 1:100 and signed in green ink by the Holocaust’s main organiser Heinrich Himmler, show the camp’s infamous entry gate, as well as detailed plans for a “dressing room,” a “delousing facility,” a “gas chamber,” a “corpse cellar” and crematorium, the paper reported.

Head of the “Reich” section of Berlin’s national archive, Hans-Dieter Kreikamp, told The Local in November that the details of the blueprint find were “foggy,” but that they were likely found when someone cleaned an apartment after a death.

“These plans, the earliest of which date from autumn of 1941, prove that organized plans for systematic genocide were underway well before the Wannsee conference in 1942,” Kreikamp said. “Some people think that was the beginning, but it was just a bureaucratic planning session.”

Auschwitz, located in Poland, was the largest of Nazi Germany’s concentration camps, where some 1.1 million European Jews were killed during the Second World War.

According to Kreikamp, Bild publisher Axel-Springer paid a “five-figure sum” to get the documents, which will later be housed in the national archive in Berlin.