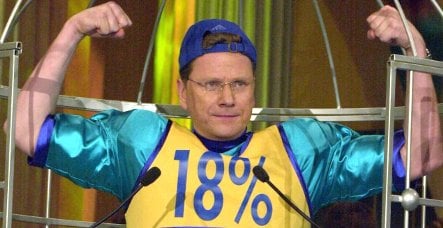 It’s difficult being August Hanning – and I don’t mean struggling to survive on a pension from his stint as former head of Germany’s BND intelligence agency on top of his current deputy interior minister salary.

No, the dilemma is this: if, as one of the country’s top security officials, you don’t warn people about terrorism, then you look like a failure when something happens. But if you do warn the Germans about a concrete threat, you get accused of being a fearmonger like ex US Vice President Dick Cheney. And if you warn people only vaguely then you begin to sound like your own mother, constantly nagging and going on about something that everyone just starts to tune out.

Now Hanning – a former civil servant for the tax office in the state of North Rhine-Westphalia (apparently one of the classical ways of becoming a senior spy in Germany) – recently issued his most scary warning yet: Islamist terror network al Qaeda, he says, is planning to influence Germany’s general election in September.

Well, you and I, as responsible citizens, know that the only true way to influence the upcoming election and block the return of the not-so-grand coalition of Christian and Social Democrats is to vote for the Free Democratic Party (FDP). There, I have said it; I never thought I would write those words.

And this fact naturally raises an intriguing question. What does Hanning really know? Has al Qaeda penetrated the FDP? Have they set up joint training camps? Is there an Islamist plot to destroy the German tax system? The answer, of course, is a resounding yes. A senior federal police official, while obviously unable to reveal his sources, gave the game away when he told Bild am Sonntag newspaper that the fundamentalists have been particularly active along the lower Rhine region. After you know that it all quickly begins to make sense. Does FDP party leader Guido Westerwelle not come from Bonn? We won’t even mention the late Jürgen Möllemann and the Düsseldorf connection. The Rhineland is a nest of sedition.

Let us sift through the evidence.

First, political violence is increasingly being expressed by the throwing of shoes at world leaders. George Bush demonstrated quick reflexes for the first time in his political career while dodging Iraqi footwear last year and this month Chinese premier Wen Jiabao had a shoe thrown at him by a pro-Tibetan German student in Cambridge.

Throwing shoes is more than a sign of contempt, it is a substitute weapon. It is a way of saying: look, if that had been a grenade, you would have been dead; a security cushion cannot protect you from the anger of the people.

There is an ideological link to the notoriously stupid shoe-bomber, Robert Reid, who inserted explosives in his Salamanders with the aim of blowing up a plane and entering heaven. Shoes are the extension of politics by other means. And who first discovered this principle in Germany? Guido Westerwelle shocked the nation by chalking 18 percent on the soles of his fine leather shoes during a television talk show. And looky there – did the FDP not just crack just that number in a national opinion poll? Clearly, there are signs afoot for FDP sleeper cells to wake from their long slumber and bring Guido to power this autumn.

And here’s another oddity from the murky undergrowth of the security services. The domestic intelligence services are alerting local police authorities to be particularly vigilant about so-called “converts.” These apparently are the most dangerous members of our community. They are the most likely, it is alleged, to take steps ahead of the election.

One could naively believe this to be a reference to German converts to Islam. In fact these people are, with a very few exceptions, completely harmless youths with a taste for growing peach-fuzz beards. The converts that pose a real danger to the grand coalition in Berlin are the strange, un-bearded fanatics who are moving from Chancellor Angela Merkel’s conservative Christian Democratic Union (CDU) to the Free Democrats. And that is the real cause for concern.

A determined investigative reporter does not take intelligence reports at face value. He digs for facts. A trip to the Rhineland was called for – I used to live there, before the Bundestag canteen moved to Berlin a decade ago. It has certainly changed since then. The Rhinelanders have grown richer, smugger. Perfect recruiting grounds in other words for yuppie FDP voters, the militant youth wing of the new terror movement.

And what did I find? In the shooting club in my old Bonn neighbourhood, once a CDU fortress, Free Democrats are now in control and are running the Karneval committee. Yes, something disturbing is about to happen during this general election.

I would ring Herr Hanning and tip him off, but his number does not appear in the phone book.