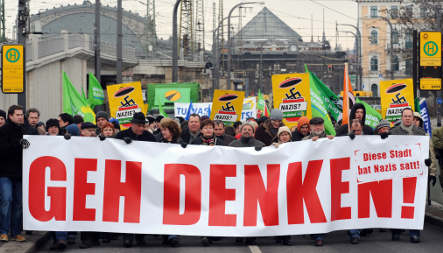 One man suffered a severe skull fracture when between 15 and 20 neo-Nazis attacked the occupants of two buses at Teufelstal near Jena on the A4 motorway when they were returning to their vehicles after a pit stop. He was to undergo surgery on Monday, news agency DDP reported.

The attack on the some 80 union members, peace activists and Left party members from the states of Hesse and North Rhine-Westphalia occurred when they were on their way home from protesting a 6,000 strong neo-Nazi march to commemorate the victims of the 1945 Allied bombing raids on the eastern German city. Police have created a special commission to investigate the incident.

The bus full of 41 neo-Nazis had left the scene of the attack by the time police arrived, but they were stopped some 15 kilometres down the road, where police took down their personal information, authorities said. Police believe the rest stop attackers were from the states of Hesse, Rhineland-Palatinate and Saarland, as well as from Sweden.

At the time police were not aware of the extent of injuries to the five attack victims, and none of the bus occupants were arrested. But on Monday police issued a nationwide warrant for three Swedish neo-Nazis who were on the bus. Though authorities aren’t sure whether they were among those who participated in the violence, they are still considered a flight risk, news agency DPA reported.

“It is inconceivable that the departure of these dangerous thugs could go unobserved by the police,” Deputy Chairman of the Left party Bodo Ramelow told DPA, demanding an investigation by the Thuringia state parliament.

But a spokesperson from the Thuringia Interior Ministry said it would have been impossible for authorities to enact a “total surveillance” on all demonstration participants.

More than 4,000 police from several states were on hand in the eastern German city on Sunday to prevent conflict between the two groups over their differing views on the air raid anniversary.

But they failed to stop Dresden residents from being harrassed by the right-wing extremists.

One Asian woman said she and her daugther were verbally assaulted and threatened in a Tchibo store in the city’s main train station over the weekend.

“We were pushed against the wall by a group who identified themselves as neo-Nazis and were called ‘you ugly monkey’ and told that ‘Germany does not belong to you’ and ‘get out of Germany’,” she told The Local.

Even though she identified the men to police officers at the train station, they did not take action against the far-right extremists.

“In short, the police did nothing to stop the continuing harrassment of coloured people in Dresden,” the woman, who described herself as former diplomat, said.

The British and American bombing of the city once known as “Florence on the Elbe” is now widely considered to have been militarily unnecessary towards the close of World War II. An estimated 25,000 people are believed to have been killed in the bombings. The city has rebuilt much of its historic centre and long since moved on, but the bombing continues to stoke controversy.

Far-right groups have for years used the anniversary of the Allied Dresden bombings for propaganda purposes. Members of Germany’s far-right NPD party in the Saxon parliament have scandalized the city by referring to it as the “Bombing Holocaust.”

Meanwhile Stephan Kramer, general-secretary of the German Jewish Council, told daily Berliner Zeitung on Monday that the large neo-Nazi turn out at the Dresden march was a dramatic signal that fears of growing right-wing extremist movements are justified.