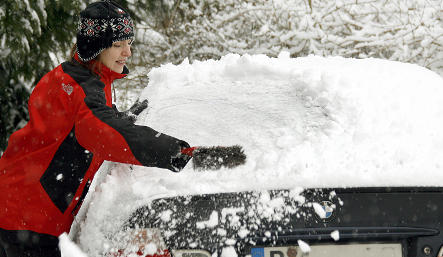 A Berlin woman clears off her car on Monday morning. Photo: DPA

Berlin’s entire fleet of 450 snow plows was out overnight providing uninterrupted clean up operations throughout the city, while the some 2,000 workers had to extend their working hours to keep up with the weather, daily Berliner Morgenpost reported on Monday.

Police in the surrounding state of Brandenburg reported dozens of auto accidents and one accident-related death from a head on collision between a car and a semi truck, news agency DPA said.

In the state of North Rhine-Westphalia, a 40-tonne semi truck blocked road and train traffic for six hours early on Monday when the driver lost control and spun onto train tracks near Overath, daily Express reported.

Icy road conditions caused the 44-year-old driver to lose control of the vehicle loaded with paper, which broke through a guardrail to come to rest on train tracks that service the Cologne to Gummersbach route, police told the paper.

Though the driver was not injured, but the accident caused more than €100,000 in damage, Express reported.

Weather experts winter road conditions to remain as snow continues throughout the day and temperatures remaining below freezing.