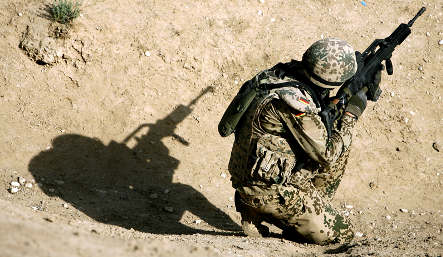 “A country that sends soldiers to Afghanistan as it does, shouldn’t think twice about money afterwards if it is for the treatment of a soldiers’ wounded spirits,” association head Ulrich Kirsch told RBB. “We also insist on a trauma centre for not just treatment, but also research.”

These suggestions will be reviewed along with others on Thursday in the German parliament in Berlin, and Kirsch said he expects sweeping approval.

“Anyone who has had something to do with these soldiers knows that they need help very quickly,” he told broadcaster Deutschlandfunk, adding that seeking psychiatric help remains stigmatized in the military. “That must change, he said. “Especially in the Bundeswehr.”

The number of post traumatic stress disorder (PTSD) cases for Bundeswehr soldiers in Afghanistan has risen from 55 in 2006 to 226 in 2008, according to reports from the Süddeutsche Zeitung earlier this month.

Symptoms like depression and addiction are effecting soldiers who struggle to return to normal life after their service in the dangerous country, the paper reported.

The paper estimated that the number of unreported cases could be high, because previous Defense Ministry figures stated that less than one percent of German soldiers suffered from PTSD, meanwhile American and Scandinavian troops report a rate of between four and five percent.