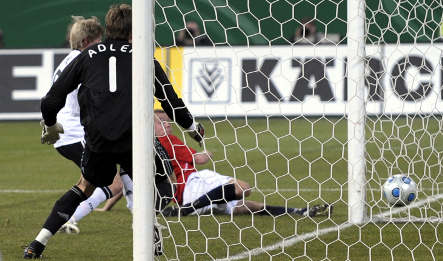 Germany finished last year with a 2-1 defeat by England in Berlin and Olsen says he also saw enough cracks in their game during last October’s World Cup qualifier wins over Wales and Russia to instruct his side accordingly.

“I had paid attention to Germany’s last three games and knew we had to bide our time and take our chances, because the Germans always make a slow start,” said the Norwegian. “I think we deserved our win here.”

Germany are ranked 54 places ahead of Norway under FIFA’s listings, but a second-half goal by Christian Grindheim, his first for his country, sealed his country’s first win over die Mannschaft since the 1936 Olympics.

But Germany coach Joachim Löw has promised his side will improve ahead of their forthcoming World Cup qualifiers.

Löw’s side are top of their World Cup qualifying group and have games against Liechtenstein on March 28 in Leipzig and Wales in Cardiff on April 1.

But it was Norway who made a fool out of Germany’s defence when Grindheim stabbed his shot home on 63 minutes, leaving the home side with a second consecutive defeat.

“This defeat is not undeserved,” said a glum-faced Löw. “We will learn from this and we will be different for our next two games. Our play was too slow, too sedate and too uninspiring. Our speed was missing and we created too few chances.”

“This is a warning for our next few games, we could not crack the Norwegian defence,” said Ballack. “We didn’t really have enough movement out there. We have to play at a higher tempo against an opponent like Norway and create more chances. We were just too sedate in our playing structure, the ball wasn’t moved forward fast enough.”