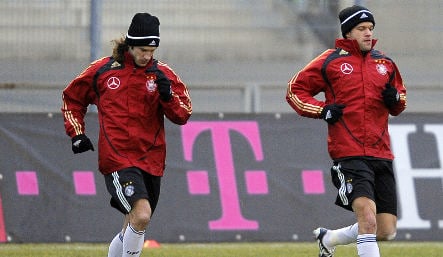 Ballack and Löw became the main talking point in the German media for a fortnight last October after the captain accused the national coach of failing to show his senior players enough loyalty.

Ballack went on the attack after veteran Torsten Frings was left on the bench for the World Cup qualifiers and the issue rumbled on until Ballack apologised with Löw retaining the Chelsea star as captain.

Both Frings and Ballack are in the squad to face Norway and Löw says the issue is resolved as Germany look to bounce back from their 2-1 defeat at the hands of England last November with a convincing display against Norway.

“The subject is checked off totally, the problem has been cleared for a long time,” said Löw ahead of Wednesday night’s clash in Dusseldorf.

But when quizzed about the issue on Monday, Ballack showed little sign of regretting his words.

“I do not regret what I said….it was constructive criticism”, said Ballack. “The team is sturdy, everyone knows each other, we all want to continue to pull in the same direction, to win matches and to be criticised when we don’t achieve that.”

Ballack has never been afraid to speak his mind and having locked horns with team manager Oliver Bierhoff before the spat with Löw, there are no guarantees the Chelsea midfielder will hold his tongue if he sees fit in the future.

Löw has said he welcomes questioning – to a certain degree – from his senior players who must guide the team’s younger members on the pitch.

“These senior players need to live up to their status, especially to guide the younger players through difficult situations,” he said.

But Ballack did at least refrain from re-igniting the Frings issue when he was asked who he wanted alongside him in Germany’s midfield against Norway.

“I have no particular wish, that is up to the coach to decide,” he said.

It is likely Hamburg wing Piotr Trochowski and Bayer Leverkusen’s Simon Rolfes will be alongside him with Bayern Munich’s Bastian Schweinsteiger in the middle, with Frings starting on the bench.

Norway are without seven of their top players and of the 19 meetings between the two sides the only time the Norwegians have won was the 1936 Olympic Games in Berlin, while Germany have won 13 of the encounters.

Roma and ex-Liverpool defender John Arne Riise has picked up a knee injury, while a trio of strikers in Aston Villa’s John Carew, Valerenga’s Mohammed Abdellaoue and Rosenborg’s veteran Steffen Iversen are all injured, according to Norway coach Egil Olsen.

Defender Borre Steenslid and forward Daniel Fredheim are also out, while uncapped forward Hogne Aaroey is missing because his wife is expecting the couple’s second child.

Olsen – who agreed to take over for a second time last month having guided Norway to both the 1994 and 1998 World Cup finals – has called up Fulham striker Erik Nevland as a replacement for Aaroey.

The 66-year-old coach had been hoping to use the 2.03-metre tall Aaroey for his considerable height in the opposition’s penalty area.

But with World Cup qualifiers beckoning against Liechtenstein and Wales later this spring, Löw has said he wants to look at some talent including debutants midfielder Mesut Oezil and defender Andreas Beck.