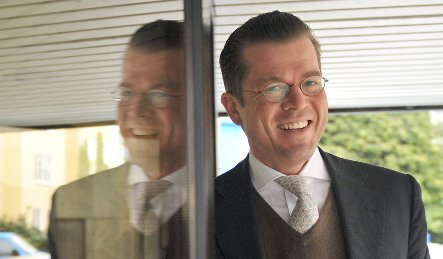 The 64-year-old Glos said he was stepping down due to his age and the need for an injection of fresh blood within his conservative Christian Social Union (CSU) party.

Elected to parliament at the age of 30, the media-savvy zu Guttenberg – full name Baron Karl-Theodor von und zu Guttenberg – is poised to be the youngest economy minister in modern German history.

In Germany, the parties in the ruling coalition – currently comprised of the conservatives and the Social Democrats – choose the ministers.

As part of Germany’s unwieldy “grand coalition” agreement, the CSU holds the right to nominate the economy and agriculture ministers.

The ministerial change comes at a bad time both politically and economically for Merkel as the parties gear up for an election campaign and the economy – Europe’s largest – faces its worst recession in six decades.

The government says economic output is expected to shrink by 2.25 percent as the global financial crisis takes its toll on Germany, the world’s largest exporter of goods.

Adding to Merkel’s worries, unemployment is rising at a blistering pace, with economists warning around 10 percent of the workforce could be out of work by the time voters head to the polls on September 27.

Independent forecasters such as the International Monetary Fund believe the recession could be even worse. The IMF has projected Germany’s economy will shrink 2.5 percent in 2009.

Glos has been widely criticised for his inactivity during the financial crisis. However, it is not clear how well-qualified zu Guttenberg is to tackle the economic woes facing Germany as he is considered a foreign policy expert.

The resignation is also a major political headache for Merkel, who has seen her popularity dip in recent months as Germans give the thumbs-down to her handling of the economic crisis.

Although campaigning is not meant to start officially for several months, Merkel’s Social Democrat challenger for power in September, Foreign Minister Frank-Walter Steinmeier, wasted no time in scoring political points from the crisis.

Steinmeier said Sunday he was “more than unhappy that the future of the economy minister is being debated in the middle of an economic crisis.”

In an earlier interview with Der Spiegel, he said Merkel’s CDU and their allies were “incapable of finding the right way to face the crisis.”

“It is only thanks to the SPD that Merkel, as chancellor, has been able to make the right decisions,” Steinmeier said.

The latest opinion polls show Merkel is still likely to win September’s election and form a coalition with her preferred partner, the pro-business Free Democrats (FDP).

But a recent poll for ARD television showed backing for Merkel’s CDU/CSU slip three percentage points to 34 percent. German voters have not warmed to Merkel’s solutions to the economic crisis, the survey showed.

However, the SPD has thus far been unable to take advantage of Merkel’s woes. The same ARD poll showed support for Steinmeier’s party dropping one percentage point to 25 percent.

The big winners from the crisis are likely to be the FDP, which saw its popularity soar during a recent state election in Hessen and whose poll numbers are ever improving – the party gained three percentage points in the ARD poll.

Meanwhile, few tears were being shed in Germany for Glos, a sharp-tongued figure, who has often been a thorn in Merkel’s side and who had a very uneasy relationship with Finance Minister Peer Steinbrück.

The front-page of the Financial Times Deutschland describes Glos’s resignation as “his first achievement.”