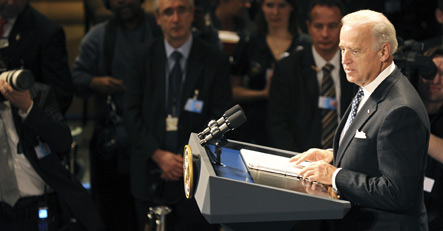 “It is time to press the reset button and to revisit the many areas where we can and should work together,” he said, addressing foreign leaders the conference in southern Germany.

Biden signaled that the new team of US President Barack Obama was ready to consider Russian demands in negotiations to renew START, a key Cold War-era nuclear disarmament treaty set to expire in December.

“We can and should cooperate… to renew the verification procedures in the START treaty and then go beyond existing treaties to negotiate deeper cuts in both our arsenals,” Biden said.

Talks on renewing START had stalled under the previous administration of George W. Bush, in part due to disagreement over Russian demands that a successor agreement be legally binding with strict verification procedures.

In other remarks Biden indicated that the Obama administration might review a project to deploy missile defence facilities in Eastern Europe that has provoked a furious reaction from Moscow.

“We will continue to develop missile defence to counter a growing Iranian capability, provided the technology is proven and it is cost effective,” he said.

The comments appeared to suggest that the multi-billion project would be reviewed, a move likely to be welcomed by Moscow.

Biden also criticised what he called a “dangerous drift” in ties between Russia and NATO, saying that they should not be viewed as a zero-sum game.

“The United States rejects the notion that NATO’s gain is Russia’s loss, or that Russia’s strength is NATO’s weakness,” he said.

“A deteriorating situation in the region poses a security threat to all of us, not just the United States,” Biden said, as Washington reviews its policy in Afghanistan and Pakistan.

He said a comprehensive strategy was needed “for which we all take responsibility, that brings together our civilian and military resources, that prevents a terrorist safe haven, and that helps Afghans develop the capacity to secure their own future.”