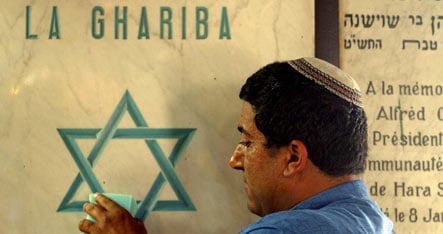 Christian Ganczarski, an Islamic convert who visited Afghan and Pakistani militant camps and met Osama Bin Laden, was found guilty of complicity in the murders and of membership of a terrorist group.

Tunisian accomplice Walid Nawar – the brother of suicide bomber Nizar Nawar – was jailed for 12 years for having supplied the attacker with false papers and a satellite telephone to help him carry out the attack.

When the month long trial began, the pair were charged along with 9/11 mastermind Khalid Sheikh Mohammed, who was also alleged to have helped plan the attack – which targeted tourists visiting Djerba’s historic synagogue.

Sheikh Mohammed, however, is imprisoned in the US base in Guantanamo Bay and could not appear in court. Judges therefore separated his case from that of Ganzcarski and Nawar and he will be tried at a later date.

After the hearing, the daughter of one of the French victims of the bombing, Catherine Christaens, welcomed the verdict.

“Justice has been served in all its dignity. We have, over the past five weeks, tried to understand the logic of the terrorists. Tonight we are relieved. Justice was done,” she said.

On April 11, Nizar Nawar detonated a fuel tanker rigged with explosives in front of the Ghriba synagogue on the Tunisian island of Djerba, killing 14 German tourists, five Tunisians and two French nationals.

Al-Qaeda claimed responsibility for the attack.

The court heard that Nawar contacted both Ganczarski and Sheikh Mohammed shortly before the bombing.

The operative, who was in regular contact with Sheikh Mohammed, put his expertise in radio and Internet communications at the service of Al-Qaeda and helped recruit members in Europe, according to investigators.

Western intelligence agencies tracked down Ganczarski after identifying a call from the Djerba suicide bomber’s cell phone and he was arrested in June 2003 on his arrival in France from Saudi Arabia.

Ganczarski is said to have given Nawar the green light to carry out the attack during the phone call. The German, however, denied all knowledge of the attack throughout his trial.

The bomber’s uncle, Belgacem Nawar, was convicted in Tunisia in June 2006 of involvement in the attack and sentenced to 20 years.

Sheikh Mohammed, who has confessed to being the architect of the September 11, 2001 attacks on the United States, is said to have been be al-Qaeda’s “military commander” and responsible for all foreign operations.

Two other suspects in the attack – Jouar Suissi and Tarek Hdia – are to stand trial before a separate Paris court in February on minor charges of violating immigration rules and possession of fake documents.