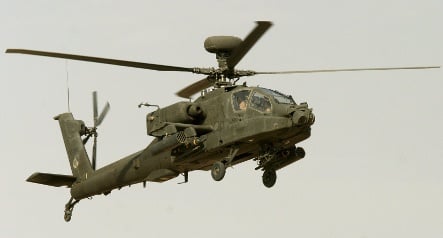 US solider Andre Shepherd was a helicopter mechanic. Photo: DPA

The closed-door hearing in the western German city of Karlsruhe sought to establish whether the deserter, Andre Shepherd, 31, originally from Cleveland, Ohio, had a credible reason to go AWOL, his lawyer, Reinhard Marx told AFP.

“It was just a fact-finding exercise so Mr. Shepherd was questioned about his situation as a soldier, about his motivation to join the army and how he decided to leave the army,” he said.

Immigration officers also asked about the internal US army procedures for leaving the army and on what grounds a soldier can claim conscientious objector status, he added.

“This was a very, very long interview, but I expected that,” he added.

Citing profound moral opposition to the US-led invasion of Iraq, Shepherd walked off his base in southern Germany in spring 2007 and spent 19 months on the run before applying for asylum in November last year. He is the first US army deserter to seek asylum in Germany.

Before then, he had completed a five-month stint in Iraq between September 2004 and February 2005 where he serviced Apache helicopters as part of the 412th Aviation Support Battalion.

When ordered back to Iraq, he felt he could not continue to take part in what he said is a “completely illegal war” and became the first US soldier to claim asylum in Germany in what could be a landmark case.

The immigration office in Nuremberg will consider the case and the final decision will be taken by Germany’s interior ministry, most likely in three or four months, the lawyer said.

“It is in their hands to decide now,” said Marx, adding, “we are very confident.”

Shepherd’s case is “very credible,” he said. “I found it was very clear that he was in a situation where he had no other choice: he had to go to Iraq or he had to leave the army illegally.”

A spokeswoman for the immigration ministry was tight-lipped following the hearing.

“For data protection reasons, I cannot give out any information about the content and the length of the hearing. The hearing took place yesterday and Shepherd gave his reasons for claiming asylum,” she told AFP Thursday. “His reasons will now be broadly examined and then we will make a decision. It is a completely normal asylum procedure like any other. I cannot say how long it is likely to last.”

Shepherd has vowed to appeal if the application is rejected.

Speaking to AFP on Monday, Shepherd said, “I will definitely fight on, as I don’t believe I or anyone else should be prosecuted for doing what they think is right.”

He added that if asylum is granted he would “definitely settle in Germany” and has “absolutely no desire” to return to the United States, despite the change of power in the White House.

The case could have profound legal and political implications. If Shepherd is granted asylum, it could open the door for other applications from the up to 80,000 US soldiers based in Germany.

Tim Huber from the Military Counseling Network, which has been working with Shepherd, told AFP on Monday the case would have a “huge impact.”

“There would not be a whole lot stopping US soldiers walking off their bases” to claim asylum, he said.

For this reason, both Shepherd and Marx are concerned that politics could play a part in the ruling. “Legally, it’s an open-and-shut case. Politically, we don’t know,” Marx said.