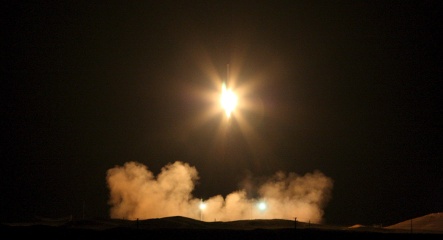 Officials from the UN Security Council permanent members – Britain, China, France, Russia and the United States – plus Germany met in Wiesbaden near the western German city of Frankfurt.

The diplomats said in a joint statement afterwards that they had “welcomed the willingness of the US administration, as expressed by President (Barack) Obama, to engage in talks with Iran.”

They emphasised their common commitment to a “diplomatic solution” and urged Iran to cooperate fully with the UN atomic agency, the Vienna-based International Atomic Energy Agency (IAEA), the statement said. They also agreed that the US, represented in the talks by Under Secretary of State William Burns, would consult with them on the next steps as Washington continues a review of its policy towards the Islamic republic.

The get-together came two days after Iran set alarm bells ringing by launching a low Earth orbit satellite into space, technology the West fears Tehran could use in the future to carry nuclear warheads.

Iran insists its first home-built Omid (Hope) satellite, launched on Monday, has no military application, but Washington made clear it was unimpressed.

“This action does not convince us that Iran is acting responsibly to advance stability or security in the region,” White House press secretary Robert Gibbs told reporters on Tuesday.

“Efforts to develop missile delivery capability, efforts to continue on an illicit nuclear programme, or threats that Iran makes toward Israel and its sponsorship of terror are of acute concern to this administration,” Gibbs said.

Although the diplomats are in constant telephone and email contact about Iran’s nuclear programme, Wednesday’s meeting marks the first face-to-face gathering since US President Barack Obama took office on January 20.

The talks began on Wednesday morning and were due to last until early afternoon. The New York Times reported that the United States was being represented by Under Secretary of State William Burns.

The West suspects Iran of secretly trying to build an atomic bomb but the Islamic republic says its nuclear programme is for peaceful purposes and that it has the right to technology already in the hands of many other nations.

So far the West has adopted a stick-and-carrot approach of applying sanctions on Iran while offering economic and energy incentives in exchange for not enriching uranium, used in either nuclear weapons or nuclear power.

Diplomatic ties between the United States and Iran have been frozen for three decades but Obama has vowed to map out a new future for US relations with Iran.

In an interview with Al-Arabiya satellite television network, Obama said last week that Washington would offer Iran an “extended hand” if Iran’s leaders “unclenched their fist.”

“Whether or not that hand becomes less clenched is really up to them. But as we look at the opportunities available to us, we’re going to have a very broad survey of what we think we can do,” Hillary Clinton said last week in her first news briefing as Obama’s secretary of state.

The Obama White House has refused to rule out any options – including military strikes – to stop Tehran from acquiring a nuclear weapon.

Iranian President Mahmoud Ahmadinejad, having earlier congratulated Obama on his election, came out with a fiery speech last Wednesday, demanding that he apologise for “crimes” against Iran and “stop supporting the Zionists.”

The host country for Wednesday’s talks has come under fire for its trade ties with Iran, with government figures last month showing an embarrassing 10.5-percent leap in German exports there in the first 11 months of 2008.

But while on a visit to Washington on Tuesday, German Foreign Minister Frank-Walter Steinmeier called Iran’s launch of its first domestically made satellite into orbit was “a worrying development” showing “once again the technical achievements that Iran is obviously capable of and the threats.”